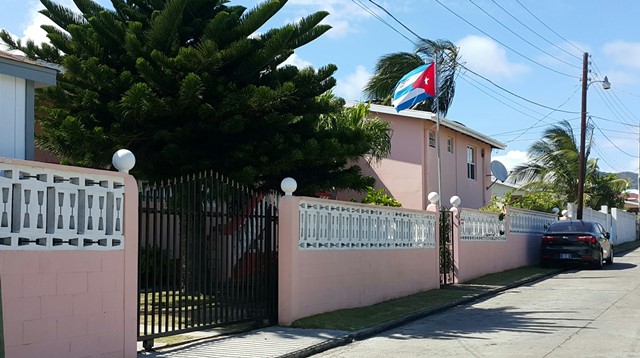 Basseterre, St. Kitts, October 9th 2017 – The Embassy of Cuba in St. Kitts and Nevis is reiterating its government’s policy in Havana with regards to migration of its citizens.

The wide ranging policy touches the rights of Cubans to travel outside the country, those who are overseas and are irregular and illegal attempts to reach the United States.

Cuba reiterated that consistent with the current migration policy, regulations and procedures in the Republic of Cuba, Cuban citizens who leave Cuba regularly, with their passport and visa, in the required cases, and subsequently become irregular migrants in their desire to reach the United States, are simply irregular migrants, not refugees.

Under no circumstances do these persons qualify to be considered as refugees, as defined in the United Nations Convention on Refugees.

Cuban citizens who leave Cuba regularly to different countries of Latin America and the Caribbean, fulfilling the requirements established by Cuban migration regulations, in their attempt to reach the United States or other countries by irregular routes, become victims of traffickers and criminal gangs operating in the region.

Havana reiterated its readiness to receive all Cuban migrants who left Cuba legally and live today irregularly in Latin America and the Caribbean, and who wish to return to Cuba in accordance with the provisions of Cuban law.

“Every irregular migrant who is returned to Cuba, is immediately reintroduced into his family. In Cuba no one is judged or punished for the mere fact of getting involved in an irregular exit or trying to enter irregularly into other countries. Only those who, at the time of their departure from the country, have pending criminal cases or those who have committed an offense associated with the illegal exit of Cuba, have to answer to justice,” the Embassy statement said.

It added that Cuba is interested in and concerned with the welfare and integrity of these migrants, for which it provides the necessary consular assistance and guarantees for a voluntary and safe return.

“Cuba is committed to ensuring a regular, orderly and secure migration, as well as to continue guaranteeing the right to travel and emigrate to Cuban citizens and to return to the country, in accordance with the requirements of immigration law,” it said.

The Embassy of Cuba in St. Kitts and Nevis stated that Havana “is committed and maintains its efforts at the regional level in the fight against the trafficking of migrants and trafficking in persons, phenomena that can only be approached in depth by all the countries of the region, in a joint way, that takes into account both the rights of migrants and the rights of countries to implement sovereign migration policies.”

“In this regard, Cuba recognizes and respects the sovereign right of all countries to issue migratory norms that control and order the traffic of persons through the corresponding borders, as well as the right to deny entry or cancel the stay of persons who do not comply with the migration requirements of each country concerned,” the Cuba Embassy said.

Photo 2 – Embassy of Cuba in St. Kitts and Nevis