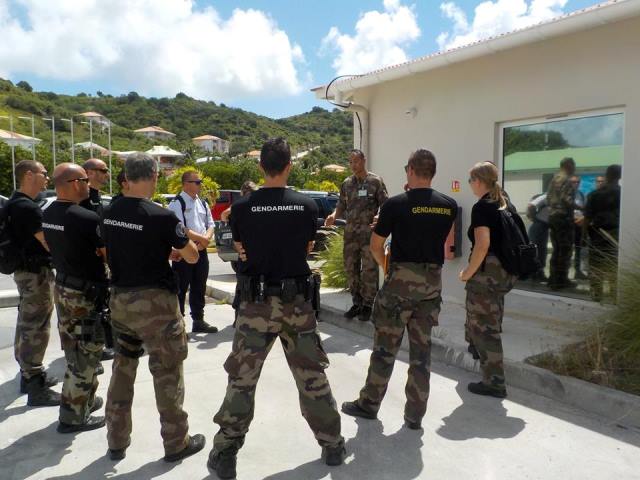 SAINT MARTIN/SAINT BARTHS – In the context of awareness-raising and training activities (neutralizing destruction of explosive devices), two démineurs (regional intervention group nedex) of the armed forces in the West Indies, Adjutant/Chief sébastien B. and Sergeant Zouhir R. visited Saint Martin June 19-30, in order to provide an induction and retraining course for the staff of the gendarmerie company of Saint Martin-Saint Barthélémy, and the police at the borders of Saint Martin.

For some, the aim was to raise awareness of the ability to prepare and support the action of the forces or intervention teams in the event of the discovery of explosive devices. For others, this was a complete review of their knowledge.

For example, ten trained personnel and five recycled staff experienced several scenarios. They experienced fictional situations, inspired by concrete cases, such as: Discovery of a booby-trapped package, a box containing explosive devices, a booby-trapped vehicle. The practical exercises took place on different sites on the island, such as the terminal of hope in Grand Case, or in a school.

It was also an opportunity to take on 9 Protection, which was used by the démineurs, whose weight of 35 kgs, in the Caribbean heat, surprised each of the insiders. The outfit is designed to protect the démineurs against the 4 effects of an explosion: Blast, fragmentation, impact and fire.

Two other courses were given where attendants agreed with the instructors that the training went well with academic, voluntary and curious trainees.

Participants of the training received a certificate (Eor), signed by the Chief of Staff in the Antilles.