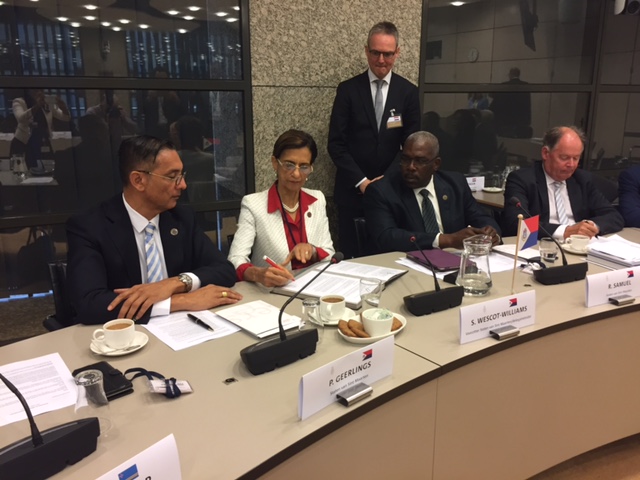 HOLLAND — From June 14-16, 2017 delegations from the Parliaments of the Netherlands, Curaçao, Aruba and Sint Maarten met in The Hague, Netherlands for the Interparliamentary Kingdom Consultations (IPKO).

Topics such as climate change and energy, youth, education, economic opportunities within the Kingdom, health care, discrimination and integrity were discussed and information was exchanged on these topics by the four parliamentary delegations. Furthermore the delegations informed one another about the state of affairs of the execution of the Paris Agreement and the latest developments surrounding the fast ferry connections between the islands. The delegations also agreed that they would request their Governments to organize a conference on Education similar to the Health Care Conference organized in 2015 and 2017 in Aruba to discuss several issues in the educational systems of the countries within the Kingdom.

The delegations expressed their concerns about the situation in Venezuela and the tangible consequences that are already being felt in especially Aruba and Curaçao but also Bonaire in the form of the increase in migration flow, crime and prostitution. The delegations agreed to keep a close eye on the situation and to request an update from the Governments and Kingdom Government.

The topic Ideal Kingdom 2040 is a relatively new topic on the IPKO agenda. It was first introduced in January 2017 and was further elaborated on in this last IPKO. The delegations concluded that there are strengths such as rule of law, joint history, mutual cooperation and Kingdom Charter but also weakness such as difference in size, cultural differences and insufficient mutual understanding, within the Kingdom. The delegations identified threats such as disintegration and Kingdom structure as well as opportunities such as mutual cooperation and exchange of expertise, within the Kingdom.

The program included a meeting with representatives of the BES islands (Bonaire, Statia and Saba) on the matter of embedding these islands in the Dutch Constitution amongst others as well as several work visits.

The Interparliamentary consultations concluded on Friday June 16, 2017 with the adoption and signing of the Agreement List and a joint press conference of the four delegations.

Prior to the start of the Interparliamentary consultations, on June 12, 2017, the delegation of Sint Maarten participated in the Tripartite meeting along with delegations from sister islands of Curaçao and Aruba. Among the topics that were discussed were Integrity Chamber, Academy for Legislation, Security, Ministerial Cooperation  as well as several IPKO topics.

The goal of the meeting was to prepare for the Interparliamentary consultation as well as discuss topics of mutual interest.

The Sint Maarten delegation that took part in the IPKO and Tripartite meetings consisted of the following members:

Mrs. Sarah A. Wescot-Williams, President of Parliament and delegation leader;