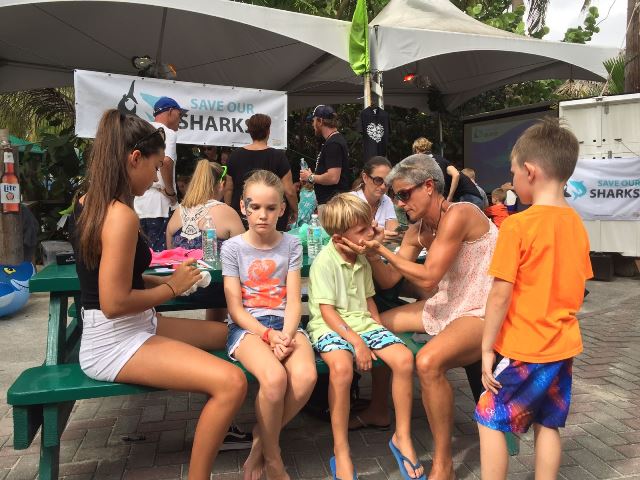 St. Maarten Shark Day was organized in order to change the perception of people about sharks. Often sharks are incorrectly displayed as villains and as being dangerous, but they are actually the victims with many species threatened with extinction through humans poaching, finning, overfishing and coastal development activities.

Worldwide over 100 million sharks are killed per year. As a result half of all shark species are threatened with extinction. “We depend on our sharks as we depend on our oceans. Sharks, as top predators, play a crucial role in maintaining balance and health within our oceans,” a release said.

On June 3, the Foundation had a well-attended Shark Day for children at Buccaneer Beach Bar, with almost 100 children showing up to learn about sharks and to test their knowledge by playing the Nature Foundation developed shark game! They had a lot of fun by colouring, making booklets and amazing shark face paintings. Children learned about St. Maarten shark species, why sharks are not frightening or dangerous, and the importance of sharks to the environment.

“People often think that sharks eat people. This is a misunderstanding, humans are not on the menu for sharks and sharks do not eat people. Occasionally, shark bites do happen, however, no unprovoked attack has been ever recorded on St. Maarten. It is more likely that you get killed by a coconut falling on your head than being bitten by a shark,” the release continued.

During the night the Nature Foundation continued with a shark party to celebrate sharks and showcase the shark research and tagging done on St Maarten. The crowd found the presentations on shark science very interesting and the public was amazed by the shark movement patterns.

“Save our sharks” ambassador and famous Dutch Comedian Jörgen Raymman, joined the shark party and spoke about the importance of sharks and his passion for the creatures. During Shark Day, Buccaneer Beach Bar did not provide environmentally damaging plastic straws and used recyclable cups in order to decrease the plastic input into the environment.

“The Nature Foundation is very happy with their environmental concerns and hopes many bars and restaurants are following their example. Way too much plastic is ending up in our oceans and threatens marine life such as sea turtles and sea birds,” the release stated.

The Nature Foundation thanked all participants and volunteers during the event. “Due to them it became a great success. We are looking forward to Shark Week 2018,” the release concluded.