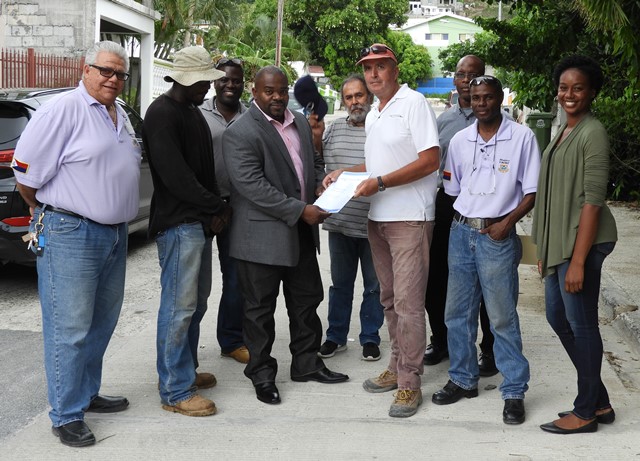 SOUTH REWARD – The Arrowroot Road sewage project has been finalized for the residents in the area of South Reward.

ADS pipes were installed on Cucumber, Carrot, Arrowroot, Pear Roads and Arrowroot Drive with 19 sewage pits. A drainage line was also installed to collect the natural water, which frequently flows on Arrowroot Road. The connections all lead to a drain box, which continues to the existing trench on L.B. Scott Road.

The main objective of the Arrowroot Road sewage project is to alleviate the sewage and ground water of Arrowroot Road. Minister of VROMI Christophe Emmanuel is elated that the project has been completed. Now residents in the area of Arrowroot Road will no longer have to suffer from water running on the road.

Esli Construction was the main contractor for the Arrowroot Road sewage project, of which D’MYRA General Maintenance and Construction and W.V. Eyes Survey N.V. were subcontracted. The project was supervised by VROMI’s Department of Infrastructure Management.

Minister Emmanuel thanked the men for all the hard work they have put into completing this project, as well as the young men in the area of South Reward, who were also hired to assist with completion of the Arrowroot Road sewage project.