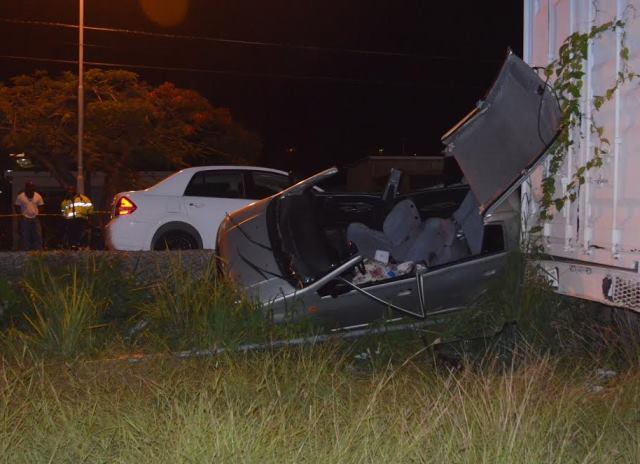 The Police Traffic department is presently investigating a serious traffic accident which took place on Thursday May 18th 2017 at approximately 01.20 a.m. on the L.B. Scot road.

As a result of the collision the M-7486 continued traveling forward destroying a wire fence and hitting into a container. The three occupants of this vehicle remained trapped in the vehicle and the Fire Department was called in to have removed by using the “Jaws of Life”.

The passengers of this vehicle were treated on the scene by paramedics and then taken to the Sint Maarten Medical Center for further treatment. After being treated by the emergency doctors the victims were admitted to the ICU for observation.

Detectives of the Special Unit Robbery are presently investigating an armed robbery which took place on Wednesday May 17th at approximately 11.20 p.m. at Cappucino Bar and Restaurant located on the Welfare road. According to witnesses this is when two masked men armed with guns stormed into the establishment threatening everyone.

The culprits then proceeded to rob the establishment of an undisclosed amount of cash and then fled scene on foot towards the rear of the building. None of the clients or employees were robbed of their personal belongings or injured during this robbery.

Anyone who may have information in connection with this robbery should get in contact with the police department by calling 54-22222 ext. 213/214, the anonymous tip line # 9300 or the emergency phone line 911.