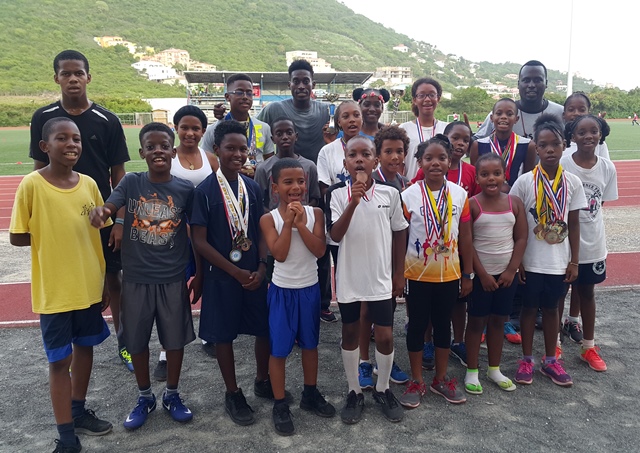 CAYHILL, Sint Maarten — There is lots of potential in many of our athletes here on the island, and it is quite evident at the Dynamics Sporting Club, a Track & Field Club for youths between the ages of 6-18 years old. 721 News had the opportunity to speak with Coach Abdule Wattley and some of the athletes during their weekly practice session at the Raul illidge Sports Complex.

Coach Wattley is currently a physical education teacher at both the Hillside Christian Elementary School and the Asha Stevens Elementary School for the past six years. He is an avid lover of the Track & Field sport as he was introduced to it by Julian “Tops” Richards through the LAPS Sports Academy. “Tops saw me as a potential athlete,” said Coach Wattley. This took Coach Wattley to many Track & Field events. “As I moved on to Tallahassee Community College, I trained with FAMU unattached, but unfortunately in my second year I tore a hamstring and that ended my running career,” said Coach Wattley.

After the coach completed his studies in Florida, he returned to St. Maarten because he wanted to give back, and became head coach at the LAPS Sports Academy. In 2007 he established his own club, the Dynamics Sporting Club (DSC), with the main goal of leading, training and developing young men and women to compete on a higher level in the sport of Track & Field; moreover the club is committed to developing these athletes in becoming strong leaders by supporting and assisting them at the highest level athletically, academically and socially. “This club would create competitiveness,” said Coach Wattley.

The club competes locally, regionally and internationally through invitational from clubs abroad.  Some of the events that the Dynamics Sporting Club participated in are the Speedy Plus International on the northern half of the island; the St. Maarten’s Day around the island run; Trupial Classic in Curacao; the Carifta Games and the French Championships in France. 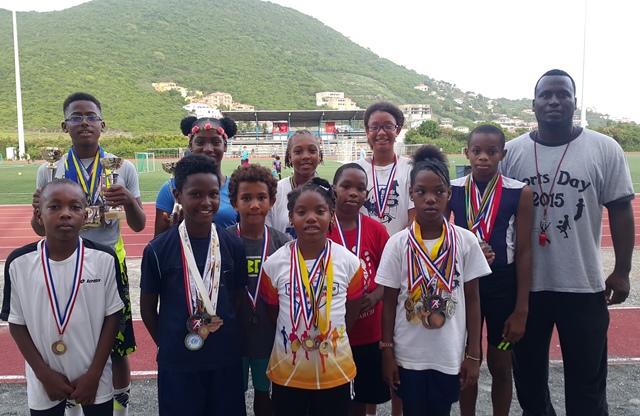 “In 2015/2016 Shakeeba Pink won two gold medals at the Carifta Games, and she was the first female to win the Brown Pelican award in the best female athlete category,” said Coach Wattley.

Coach Wattley mentioned that the club currently has 40 athletes with lots of talent. He further stated that the club is busy rebuilding as many senior athletes left for college. “Currently we are working with the Sports Federation on restructuring the St. Maarten Amateur Athletics,” said Coach Wattley.

721 News spoke with some of the athletes to hear from them first hand their experiences in the sport of Track & Field. Sheldon Wilson a senior athlete with Dynamics Sporting Club told us that he has been training with Coach Wattley since 2008, and he competes in the 200 and 400 meter races. “I remember my first competition was in Anguilla, and I was very nervous, but I managed to come in second place,” said Sheldon.

Sheldon has competed in many countries, such as France, Curacao, Guadeloupe, Bermuda, the Bahamas, and the Dominican Republic. He is currently studying in Tallahassee Florida to become a physical therapist. “I have my cousin Leandro Peters to thank for me being in the sport today, because he introduced me to track with Coach Abdule, who gave me the boost to continue,” said Sheldon.

Another athlete, 13 year old Chamiqueko Landefort does the 100 meter, long jump and the ball throw. His first gold medal was won at a competition at the Raoul Illidge Sport Complex, and he later moved on to win four medals in a competition in Curacao. “I have a bright future ahead of me in the sport I love running, and my goal is to one day beat Usain Bolt,” said Chamiqueko. He will be travelling in the summer to Curacao with other athletes of the club to compete in the Trupial Classic.

Le-Var Pieters, another star athlete of the Dynamics Sporting Club started track & field when he was five years old, he is currently 13. Le-Var had the opportunity to train at a track & field camp in the Dominican republic to improve his skills. He told us he has 46 medals and eight trophies, and he usually takes part in the 200 and 400 meter races. He also will be travelling to Curacao for the Trupial Classic, but intends to rest the balance of the summer, so that he can start strong next season. Le-Var’s goal is also to be in the Olympics and to be better than Usain Bolt.

The club also has many female athletes, and we spoke briefly with one of them, which is Shana Thompson, a 15 year old St. Maarten Academy-Academic Section student. “I started running track & field at the age of 11 going on 12 as it was a birthday gift, because I always wanted to run track & field,” said Shana. She runs the 100 and 200 meter and has eight medals and five trophies accredited to her name, and has competed in Anguilla and Curacao. Shana told us that she wants to take up track & field as a profession, but warns that it’s a lot of hard work with intense training. “Eating healthy and staying fit is very important,” Shana said.

Fourteen year old Denzel Washington is probably one of the latest additions to the club, as he joined six months ago, but he is no stranger to track & field. Denzel started running track & field in 2013 in Curacao. He has attended 12 championships, six invitations and local competitions on Curacao. “Here in St. Maarten I do the long jump and the 100 meter, but I would love to do hurdles and high jump, because I use to do them in Curacao,” said Denzel. Since joining the Dynamics Sporting Club six months ago he has participated in three competitions, and won all three of them, two were 100 meter races and one was 100 meter and long jump. Denzel will be taking part in the Trupial Classics in Curacao over the summer, where he will compete in the shot put, ball throw, long jump, 100meter and 80 meter races.

It was a pleasure for 721 News to have met with these enthusiastic group of athletes and their coach. We wish them all much success in their upcoming competitions.