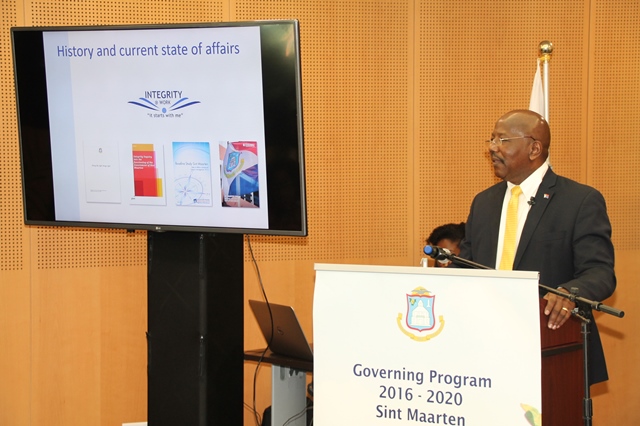 The main agenda points of the session were the Governing Program; integrity and the plans of the Dutch Government towards establishing an Integrity Chamber on Sint Maarten and their recent appointment of a Dutch Integrity Quartermaster and an update on the budget 2017.

The Council found it essential to inform the key leaders and advisors of the organization in person about these key matters.

While the Prime Minister, William Marlin, spoke on the issues of the Governing Program and Integrity, the Minister of Finance, Richard Gibson Sr., elaborated on the budget.

At the same time both Ministers stressed the importance of the role of each civil servant in the process of making Sint Maarten great. The session was well attended; the Council of Ministers will conduct similar information sessions in the near future to safeguard transparency and open communication with and within the organization.

Both the Council of Ministers as well as the ministers on an individual basis will ensure that the civil servants receive the required information necessary to fulfil their tasks and responsibilities.

He explained that the Governing Program “Stability for Prosperity” was the product of a workgroup consisting of members of the three different political parties – National Alliance, United Sint Maarten People’s Party and the Democratic Party – which all want to address different issues in different ways.

The common ground among all three parties were identified and written down in the program. The Secretaries General of the different ministries and the cabinet members all provided their input in finalizing the program.

The Prime Minister stressed to civil servants present that the success of the Governing Program depends on all the civil servants acting as the managers of the process while focusing on certain priorities.

He stated:  “You are here because we want to emphasize that you are important in the execution of the Governing Program. It is about liking your job. We are already in March and we are already executing. It is a government for four years and we may begin in 2017 and certain things may run over in 2018, 2019 and 2020.

In regards to the topic of Integrity, the Prime Minister explained that there is a major difference in interpretation of integrity and how to deal with it between Sint Maarten and the Dutch.

He acknowledged that there are integrity issues on Sint Maarten, but Sint Maarten decides WHAT to accept in the issues with integrity and HOW to deal with unacceptable things. An Integrity Chamber should not be single handedly imposed by the Dutch Government.

Management was urged to continue to provide service in an integer manner to the public of Sint Maarten.

The Minister of Finance continued the presentation on the budget of 2017. He personally thanked each civil servant for their contribution seeing that today’s surplus in the budget would not have been possible without each one of them, yet stressed that a lot more work needs to be done.

He pledged financial assistance to the youth, the prison, the tax department and the Ministry of VROMI. In regards to the capital investment, Management present were tasked with the responsibility to prioritize their plans and projects for final decision making by the Council of Ministers.

“The exercise is needed for Sint Maarten to take advantage of the opportunity to apply for a NAF. 30 million loan to be approved by the ‘College financieel toezicht’ (Cft). This becomes the first time since 2014 that Sint Maarten can borrow capital expenditures and make investments so the Gross Domestic Product can grow”, noted the Minister of Finance. He was confident that the future looked much brighter.