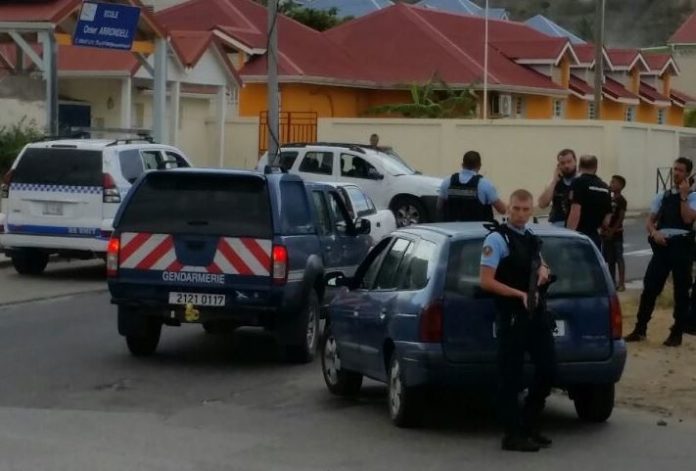 UPDATE (March 30, 01:38 AM):
One of the scooter suspects who let multiple gunshots at police in Suckergarden was arrested on Wednesday night by the Gendarme and the scooter was also found.

POLICE REPORT: PHILIPSBURG, Sint Maarten — On Wednesday March 29th at approximately 03.30 p.m. a police patrol started chasing a scooter (skeleton-scooter) in the Sucker Garden road in the direction of Bishop Hill. The patrol wanted to control this vehicle and to verify the identity of the two occupants. Both occupants of this scooter were wearing a helmet making it much more difficult to identify these persons.

As the patrol chased after the scooter the passenger pulled a gun and without any regard for the lives of persons living in that area, turned and fired numerous shots at the police patrol in order to escape. The patrol had no choice than to seek a safe area and return fire. The suspects then continued to flee and crossed the border via Coralita towards the French Quarter area.

During the chase the French Gendarmes were informed what was taking place and that the police patrol was crossing over to the French Side. Numerous Gendarmes patrols took over the chase and started a search the in French Quarter area to locate the two suspects.

The search continued until late in the evening however no-one was arrested as suspects in this case. The investigation to locate these persons will continue. As more information becomes available the media will be informed.