The alleged offender was taken before the Magistrate’s Court on Monday 27th March, 2017 and was granted bail in the sum of EC $40,000.00 with one surety. He is to reappear in Court on the 23rd June 2017 to answer to the charge.

The bail conditions are that the alleged offender has to surrender his travel documents forthwith. He is not to have any contact whether directly and indirectly with the virtual complainant and he is to keep the peace and be of good behavior.

The Royal Anguilla Police on Sunday 26th March, 2017 arrested a fifteen (15) year of Sachasses who was later charged with Possession of Stolen Property.

The alleged offender who was taken before the Magistrate’s Court on Monday 27th March 2017, and was granted bail in the sum of EC $15,000.00 with one surety. He is to reappear in Court on the 5th of April 2017 to answer to the charge.

The bail conditions are that the alleged offender has to keep the peace and be of good behavior.

The Royal Anguilla Police Force on Monday 27th March, 2017 officially opened its Forensic and Exhibit Center with a brief ceremony with the unveiling of a plaque.  The ceremony was attended by Her Excellency the Governor Ms. Christina Scott and Mr. Darren Forbes-Batey Staff Officer from the Governor’s Office, Ms. Lydia Davenport, Elaine Stedman, Sarah Murphy and Gerard Navesey members of the CEOP team were also in attendance.

The facility is a joint venture bringing together funding provided by the FCO, CEOP and the Governor’s Office, said Commissioner Morrison.  “Shortly after I arrived in Anguilla I expressed an interest to develop better local facilities to improve investigations and save money.  This facility will allow us to examine evidential material from scenes as well as ballistic material.  It also provides secure storage for exhibits and property recovered by the police as well as case files.  This project underpins our commitment at the RAPF to develop a professional police force which puts victims at the heart of all it does”. 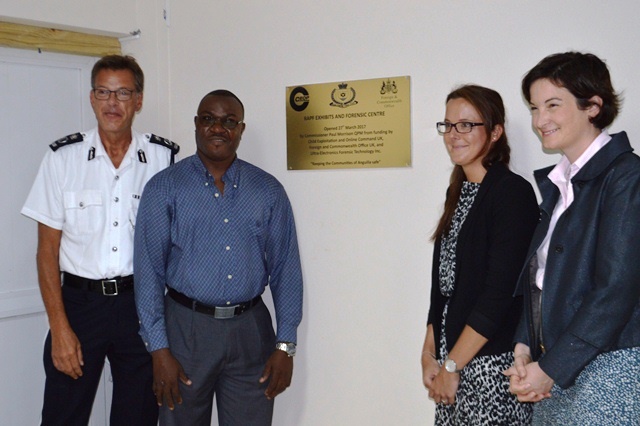 The Governor said: “I am pleased to see the continued United Kingdom Government’s investment in the RAPF. The creation of the new centre was very much a collaborative effort between the UK Government and the National Crime Agency’s Child Exploitation and Online Protection (CEOP) team together with the RAPF and Governor’s Office in delivering the project.”

“The work of CEOP is to promote the safeguarding and protection of children and when that comes to an investigation, every aspect is important from victim care through to forensic evidence and exhibit integrity,” said Detective Inspector Lydia Davenport of the CEOP team.  “As part of the scoping exercise conducted by CEOP, we recognised that the importance of forensic and exhibit integrity was vital as well as secure facilities for items produced during some of the most serious investigations and we were pleased to be able to assist in supporting the funding for the new forensic and exhibit centre. There are forces across the world who would be envious of the facilities that the RAPF have created and they should be incredibly proud of that”, Ms Davenport concluded.

Other projects of CEOP are the creation of dedicated interview rooms for use in interviews with children and vulnerable victims which will allow a better environment for these interviews to be conducted as well as further training.