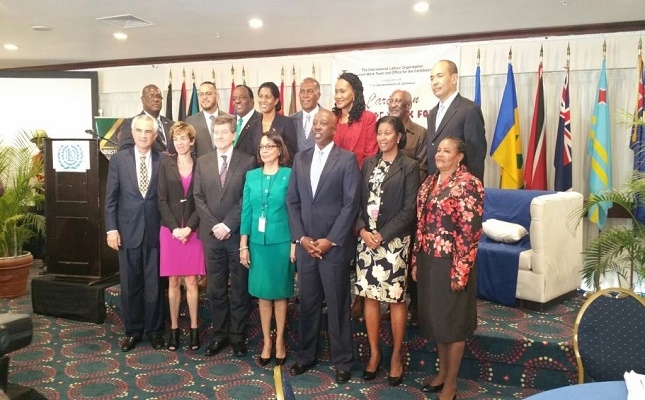 KINGSTON, Jamaica – The ILO presented the 2016 Report on “Non-Standard Employment Around the World: Understanding Challenges, Shaping Prospects” to the Caribbean in the context of the 10th ILO Meeting of Caribbean Ministers of Labour, February 23-24, Kingston, Jamaica.

The 17-Caribbean country delegations, including 11 Ministers of Labour, as well as employer and worker representatives, engaged in the discussion. ILO Employment and Labour Market Specialist Mariya Aleksynska explained: “There is a greater variation in the employment relationships, with many workers in part-time, temporary employment, employment arrangements including multiple parties, disguised employment or dependent self-employment such as contract work, in all parts of the world, including in the Caribbean region.” In the Report released in November 2016, ILO refers to these arrangements as “non-standard forms of employment” (NSE).

Chairman of the Jamaica Labour Market Reform Commission Dr. Marshall Hall suggested that many non-standard jobs are to be found in the informal sector, and that addressing informality may also help to tackle NSE.

NSE arise as a result of technological advances, including the rise of businesses in the gig-economy that employ workers through internet platforms and mobile applications as independent contractors. NSE also proliferate as a result of globalization pressures, demographic changes, macroeconomic fluctuations, and regulatory gaps.

In the Caribbean region, particular attention should be paid to contract labour and to disguised employment relationships. Examples of such employment forms are to be found in the hotel and food industry in Jamaica, or in the public service in Trinidad and Tobago. Part-time work reaches about 9 per cent of wage employees in Belize and Bermuda, the Report says.

Although NSE has become more widespread, the Report found that there are important divergences in the use of NSE among firms, even within the same country and industry. Among private-sector firms in the textiles sector of the Caribbean region, more than half of enterprises do not use temporary labour, whereas around 7 per cent use it intensively (with more than half of their workforce on temporary contracts). The highest proportion of firms not using any temporary labour is to be found in Antigua and Barbuda, Dominica, and Saint Lucia.

Non-standard jobs can provide access to the labour market, including for disadvantaged groups such as youth or migrants, and in some instances, can provide opportunities for moving to better jobs.

In addition, non-standard forms of employment can provide flexibility to both enterprises and workers, especially when part-time work is chosen voluntarily.

The Report cautions, however, that some forms of non-standard employment can be associated

with greater insecurities for workers, including insecurity over employment, lower wages, lower social security coverage, or poor training outcomes. In countries where NSE are widespread, workers risk cycling between non-standard jobs and unemployment. For enterprises, while the short-term benefits of using NSE can include cost saving and flexibility, in the longer run, excessive reliance on NSE can lead to conflicts between workers, higher absenteeism, lower motivation and productivity.

There is evidence that firms that use more NSE tend to underinvest in training, both for temporary and permanent employees, as well as in productivity-enhancing technologies and innovation. Excessive reliance on NSE can also lead to labour market segmentation, greater volatility in employment with consequences for economic stability, difficult access for NSE workers to credit and housing, and consequent delays in starting a family.

Building on guidance from international labour standards and national practices, the Report highlights policy recommendations to address decent work deficits in NSE in four main policy areas: Plugging regulatory gaps – including policies that ensure equal treatment among workers regardless of their contractual arrangement; policies establishing minimum guaranteed hours and limiting the variability of working schedules; legislation and enforcement to address employment misclassification; restricting some uses of non-standard employment to address abuse, and assigning obligations and responsibilities in employment arrangements that involve multiple parties.

Strengthening social protection by eliminating or lowering thresholds on minimum hours, earnings or duration of employment; making systems more flexible with regards to contributions required to qualify for benefits, allowing for interruptions in contributions and enhancing the portability of benefits. These changes should be complemented by universal policies guaranteeing a basic level of social protection.

Instituting employment and social policies that support job creation and that accommodate workers’ needs, not only for training, but also for family responsibilities such as childcare and elder care.