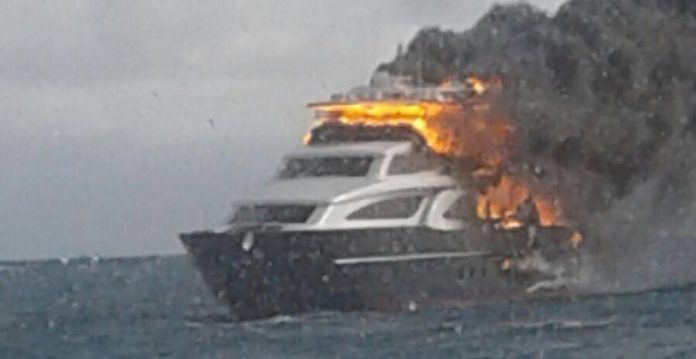 Source story: BVI NEWS
BVI — A number of persons escaped an inferno today (March 6) when the boat in which they were traveling went up in flames in the British Virgin Islands (BVI).

According to a representative of the Virgin Islands Search and Rescue (VISAR), Phil Aspinall, the captain and crew are all safe.

He said the incident happened near Dog Islands, which is located west of Virgin Gorda.

The vessel is said to be called Limit Less.

Aspinall told BVI News Online that investigators – including the police – are still trying to ascertain more details regarding the vessel and the fire.

‘The captain said everybody is off, but it isn’t known yet how many people were on board. The police are on their way to interview the captain and the crew. They got off [the vessel] on their own tender; they weren’t rescued although we went [to the scene]. They had already decided to abandon ship by that stage.”

Aspinall further stated that, based on his observation, the vessel was badly damaged.

Asked if firefighters were on location, he told BVI News Online: “The salvage company is at the location; we’ve pumped [water] from whatever it has got. He (person from the salvage company) is doing his best, but the vessel is pretty well gone, based on my honest assessment so far.”

Aspinall also said the US Coast Guard was the one that informed local authorities about the incident.