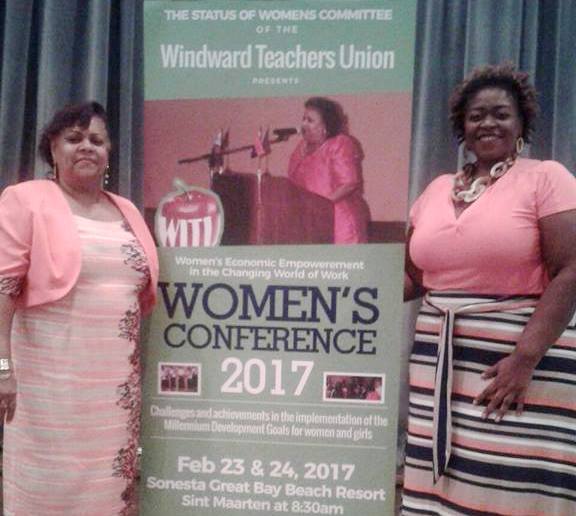 PHILIPSBURG – The Status of Women’s Committee of the Windward Island Teacher’s Union (WITU) hosted a two-day Women’s Conference in Sonesta Great Bay Hotel with the Theme: “Women’s Economic Empowerment in the Changing World of Work,” on Thursday, February 23, and Friday, February 24.

After the tone was set for the Opening of the Conference with a warm welcome to all by the gentle voice of the moderator Sagan Gibson, the St. Maarten Song was sung by the young male voice of Bradly Attyl.

President of WITU Claire Elshot-Aventurin also extended a warm welcome to the delegates of the Status of Women’s Committees of the Caribbean Union of Teachers (CUT) from the various countries of Bermuda, Barbados, Bahamas, Guadeloupe/ French Saint Martin to St. Maarten’s shores.

All the participants from the various local unions such as ABVO-SXM, SMCU, WICSU-PSU, WIHCUA and the various Women’s Organizations such as Prominent Women, B3-Lifestyle, Anti-trafficking & Aglow International, Safe Haven, members of St. Maarten Youth Parliament and the teachers and members of school management teams and school boards and the presenters were present at the Opening.

After thanking the Minister of Education Silveria Jacobs and Minister of Labour Emil Lee and head of the Department of Community Development, Family and Humanitarian Affairs Aida Holaman, and the board of WITU for the financial support. Elshot wished everyone a successful women’s conference, and assured the participants that their valuable contribution will be part of the discussions, where Education International (EI) will critically look at the link between the rights to education and the challenges faced with the implementation of the Millennium Development Goals for women and girls.

She also remarked that the idea was born when WITU, as a member organization of EI, received an invitation to nominate a representative to be part of the 61st Session of the UN Commission on the Status of Women March 13-15, 2017 UN Headquarters in New York.

She encouraged and motivated all to be actively involved in the discussions and to listen keenly to the presentations that would be thought provoking and very relevant to “our situation as women.”

She remarked that a number of great women of St. Maarten, who are no longer with us, have made their contributions and have let their voices be heard at similar events in the UN Headquarters and in Beijing 2000, setting the tone for a number of rights and privileges we enjoy today. “It is therefore our task to continue their legacy that they have left behind. Thanking these great and brave ladies and looking forward for the contributions of everyone present to make the Women’s Conference fruitful and a great success,” she said.

The program continued with the Secretary General of the Ministry of Education, Culture, Youth and Sports Affairs Jorien Wuite delivering greetings to the participants of the conference on behalf of the Minister of Education, who said that she was deeply honored as the sole female in the Council of Ministers to be given the opportunity to address the conference.

The Mariah Carey song “Hero” was sung by Attyl. 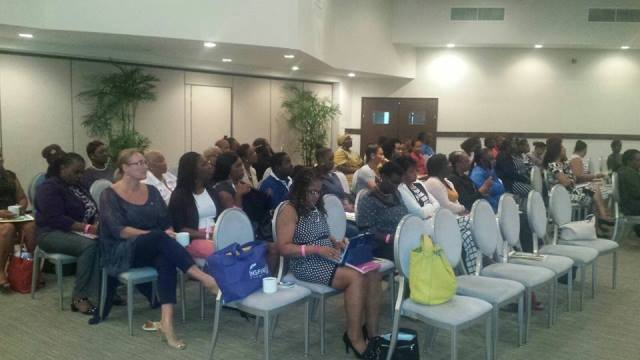 The first day of presentations were marked with topics and presenters as follows:

Dr. Albert-Poyotte is a great activist and is no stranger to St. Maarten since she was invited by our former Minister of Education Patricia Lourens-Philip to deliver the Keynote address at the Celebration of World’s Teachers Day in Port de Plaisance. She also represented EI in the mission to Haiti after the devastating earthquake.

Live and interactive question and answer sessions followed each presentation before the closing of day 1.

The second day started at 9:15am when the moderator called the gathering to order that consisted of a few new faces with her unique welcome. After reading the greetings from the General Secretary of the CUT Don Howell, bringing well wishes to this Conference, she took time recap the discussions of day 1.

The presentations that followed:

This event was not just another conference, and several voices expressed appreciation and thanks to WITU’s Status of Women’s Committee for extending the invitation to them, and they would like to see this become an annual event. They are also eagerly awaiting to be part of the follow-up and to receive the conclusions on the way forward with networking on several levels within the region and internationally.

In closing, “I would also like to thank Mr. Serge Artsen of Sonesta Beach Hotel and the staff of Sonesta Great Bay Beach for their valuable contribution in making sure that the participants were well treated on both days to delicious well prepared lunch, and goodies during the coffee breaks. Mrs. Fabiana Vanterpool-Arnell, Ms. Aida Holaman, Department Head of Community Development, Family and Humanitarian Affairs, Mrs. Elencia Baptiste-Boasman of Women’s Desk & CDHA, Management of Sundial School, all the presenters and participants because without them and their participation, we could not have this great success. Ms. Diana Windefelde took charge of the transportation of all the delegates to and from the airport, and the hotel to the Conference site. And last, but not least the well-articulated moderator, Ms. Sagan Gibson, who directed this two-day program, and questions and answers in an orderly fashion,” stated Elshot in closing.