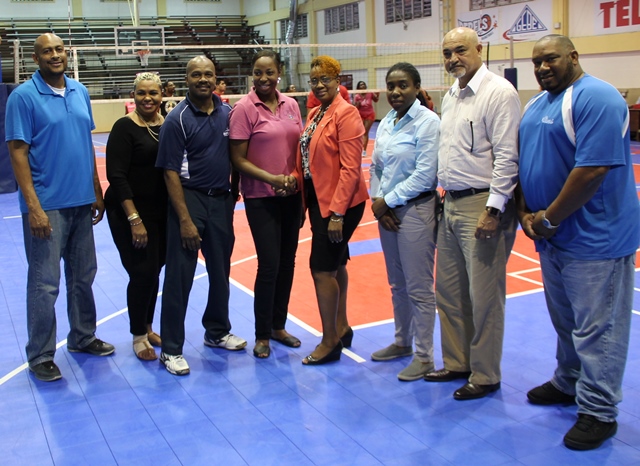 Following receipt of this new court, it was decided by SIMVA to donate the court to government facilities, and installed and lined the L.B. Scott Sports Auditorium for the use of volleyball and basketball.

The government facility is managed by the FUSF/NSI, which is the executing arm of government with regard to various sports on the island. The official handover to government took place Wednesday, February 15, and Minister of Education, Culture, Youth and Sport Silveria Jacobs, was present for the handing over of the floor.

Others present at the handing over were: Director of the National Sport Institute (NSI) David Forsythe, board member Keishan Huggins, the facilities management team consisting of Jacqueline Richardson, Sigfried Hodge and Reynaldo Euson; President of SIMVA Raymond Jacobs, and head of the Department of Sports Jonelle Richardson.

The lifespan of the court, with optimal care, is between 15-20 years. Minister Jacobs expressed gratitude to the SIMVA for the contribution to sports on St. Maarten. The restoration of the court has been long overdue.

The Department of Sports within the Ministry ECYS has been funding the NSI and the various sporting associations including SIMVA to strengthen them to become federations, which in turn, allows for the growth and longevity of sports on the island. The court was presented during the school volleyball tournament, which is currently taking place at the L.B. Scott Sports Auditorium. 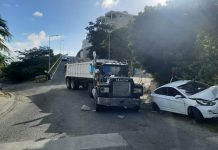