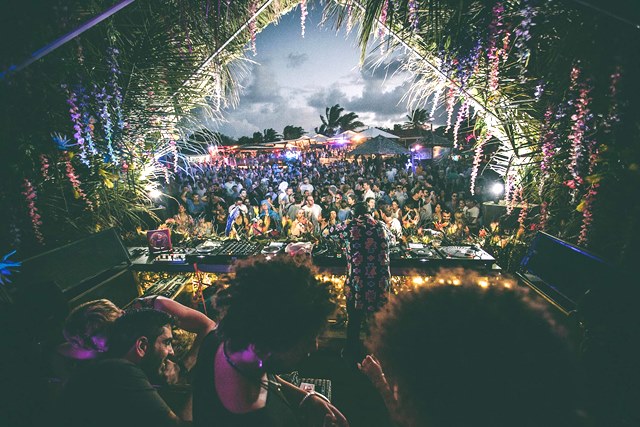 ST. MAARTEN/SAINT MARTIN – SXM Festival, an electronic music extravaganza on the Caribbean island of Saint Martin/St. Maarten, today announced the location for its oceanside daytime events as well as its Downtown Maho party featuring a slew of local talent programming.

SXM Festival is pleased to reveal the keenly anticipated day party venue for this year’s event: Happy Bay. Happy Bay Beach is one of Saint Martin’s best kept secrets – a stunning, secluded stretch of azure water and golden sands in the north of the island that can normally only be accessed by foot or by boat.

For the five days of the festival, this hidden gem will be transformed into an enchanted party paradise where revelers can swim, sunbathe, shop and – most importantly – shake it to a soundtrack of the world’s best underground house and techno music. The beauty of this unique location really must be experienced to be believed.

As a continuation of SXM Festival’s mission to fuse the world’s premiere electronic scene with the natural and cultural beauty of Saint Martin, the event has announced a free party dubbed Downtown Maho, which will showcase the best local DJ talent alongside imported superstars from across the world.

Taking place at Three Amigos and also at Simpson Bay’s favourite dive bar DIrty Sanchez, local partygoers and the festival’s globetrotting clientele will mingle on the dancefloor for a day of intercontinental connection never before experienced in the Caribbean. It is such culturally focused programming that is enabling SXM Festival to promote Saint Martin to the global travel community.

Saint Martin residents have additional reason to rejoice, as the festival is offering a special price for locals, available now at a run of shops throughout both sides of the island. In addition to the Downtown Maho event, these passes will give locals access to night parties at Tantra, Refuge, SkyBeach, and more.

It is this mix of fine-tuned musical curation, rich local culture, an astonishing natural setting and a quality over quantity model that has come to define the SXM Festival experience. With an already budding community of dancefloor devotees and the attention of the globetrotting party elite, 2017 will see the festival rise even closer to its fated ranking amongst the world’s best music7 events.