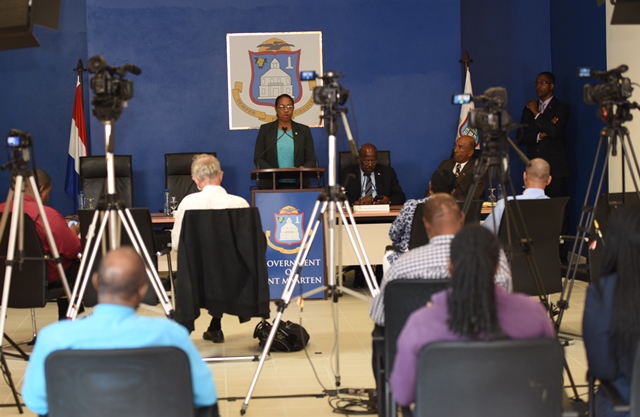 PHILIPSBURG –  At Wednesday’s, February 1, Council of Minister Press Briefing, Minister of Education, Culture, Youth, and Sport Silveria Jacobs updated on the issues her Ministry was dealing with.

Agreements were finalized to get the works moving at the Leonald Connor School on “the critical upgrade, which we’ve been speaking about for quite some time.”

The company that won the contract was Hemco NV and Representative Henry Frederick signed an agreement. In addition, CEO of GEBE Kendrick Chittick also committed to the financial agreement to cover the finances for this upgrade, which is slated to begin as soon as the first transfer is made.

“I would like to thank once again the parents, students, management and staff of the Leonald Conner School for their continued support. The end is near. Hopefully, we can see it coming. The contractor has promised 4 weeks…We had initially told them 4 to 6 weeks once we commenced, but the contract clearly states 4 weeks and so we’re holding him to that,” Minister Jacobs stated.

She also thanked GEBE “for their good corporate citizenship in providing the support needed to be able to carry out this upgrade as quickly as possible.”

In regard to Charles Leopold Bell School, Minister Jacobs said, “some of the other issues that have been mentioned by the management and staff at the Charles Leopold Bell school where the cycle 1 and management are housed have been addressed, some of them. I personally took a walk through yesterday. We had New Works Department Head as well as the contractor to ascertain what needed to be done, and I was assured that within two weeks that everything would be finalized.”

She continued, “It had to be done including the new basketball court and covered area at that location. That court once it is finalized will be unveiled and will be of a great benefit for the Cole Bay community, which has been waiting for that for quite some time.”

In addressing issues at other schools, Jacobs said, “this ministry is systematically looking to prioritize all of the challenges where maintenance is concerned, but not just maintenance, but also looking at the levels of education, accountability on all levels and will be working hand in hand with Division Public Education under schools management to get these done. So we’re looking forward for 2017 to be the turnaround here in terms of all areas within Public Education.”

The Minister mentioned the iStep Program, whose team hosted a meeting with all teachers participating in the iStep pilot program on Thursday, February 2 at 1:30pm at the government administration building. “The meeting aimed to provide teachers with information on iStep. Give them a formal introduction to the devices that will be utilized in the pilot project, the trainings they will need to follow and outline the tasks and responsibilities associated with being a pilot teacher in such a pivotal program, to bring IT into our classrooms,” Jacobs stated.

“Each public school has already identified the two pilot teachers and a backup teacher that will participate in this pilot training. We feel that we really need all hands on deck to be able to be successful in the implementation,” she continued.

The logo competition of iStep team is now officially closed, and within two weeks the winners will be announced. The public can visit the iStep Facebook page in order to receive any updates on the iStep, as well as information on the integration of technology in education. Search for iStep SXM, like and share.

“The Sports Department would like to inform that we have currently completed our first round of swim exams. As many may recall since 2013, when we have been executing exams within the schools the government has been sponsoring a swimming program, which all grade three students in the subsidized schools on our islands take part in. The exams this year took place at the Belair pool on Monday and Tuesday, January 30, and 31. And we are pleased with the number of students who have obtained their first swimming Diploma A,” Minister Jacobs informed.

“592 students are currently in the swimming program, which started last September; 74 of the students came into the program already holding diplomas so that shows at least that parents are doing their part. That left 518 students who did not have diplomas.  However, 67 of them are already swimmers; 70 students obtained their diplomas in the two exam days recently concluded, and the remainder of the students will still have the opportunity later this school year before the end of the school year to obtain said diploma,” the Minister continued.

“Once the diplomas have been finalized by the department, they will be disseminated to the various schools and students. So this is one of the programs that we run on a yearly basis from within government’s budget and we’re happy to see such a great success rate,” she said.

She asked the “general public to be very careful in the use of the public facilities that have been made available. We have had to consistently spend a significant amount of money making repairs to the facilities and specifically the basketball courts because of vandalism. It is important for all of us as persons within the community to have access to these facilities, and this can only be possible if we as a community take responsibility and should care for what is made available.”

Minister Jacobs also addressed complaints made in the media about the Study Financing Department. “I’ve taken note of complaints that are coming through the media and I must say it’s usually a shock as it did not come through Department nor the Ministry prior, and I believe that while we as a community are much more vocal, this is a good thing. I believe we should follow the process and only when there seems to be no way out, use the media as your outlet. So I would like to encourage the general public that any and all complaints department-wise, division-wise, within the Ministry should be addressed directly to the Ministry via the Secretary General Jorgen Wuite or myself.”

In addition, the Youth Department is currently engaged in the preparation of a national comprehensive education vision. “This vision focuses on the nurturing and bringing up of children on the island. And as part of the action plan for children’s rights across Aruba, Curaçao, St. Maarten, the Netherlands and the BES islands…to assist St. Maarten in preparing and formulating the plans with this vision, a UNICEF consultant is currently on the island to meet with various stakeholders of both public and private sectors. The outcome of these meetings will be used eventually to draft a proposal of the comprehensive educational vision. However, the preliminary findings and best practices, will be shared at a conference on Bonaire in March 2017, with the four countries,” Jacobs informed.

The wider community can also attend this two-day conference, but will be responsible for their own expenses related to the conference.

Individuals or groups wishing to participate in this conference can contact the Department of Youth Affairs. The UNICEF consultant has requested meetings with the Council of Ministers and also with parliament, however, due to the short notice, the meetings will be informal in nature, “as it will be just an information dissemination.”

Minister Jacobs also informed that her cabinet was complete and introduced the cabinet members of the Ministry of Education, Culture, Youth and Sports. They are: drs Soraya Agard-Lake as senior policy adviser; Sandro Garcia as senior policy adviser; Fabiana Vanterpool-Arnell as policy adviser with a specific interest in culture and education; Francisca Matinburgh as executive secretary, and Roylyka Roache as Public Relations Officer/executive assistant.