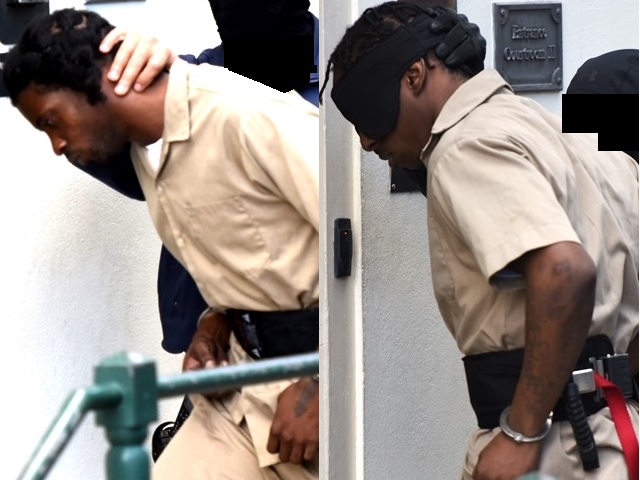 GREAT BAY – The Common court if Justice imposed higher sentences on Ridge Damisse and Jovanny Leon, the two young men who committed the armed robbery at the Oro Diamanté  jewelry store on Front Street on August 5, 2015 that resulted in the death of police officer Gamali Benjamin.

The court upped the sentence for 25-year old Damisse from the 20 years he had received in the court in First Instance to 25 years and it almost doubled the punishment for Leon (21) from 8 to 15 years. A third defendant, cab driver Obed Cangieter (35) was acquitted in the Court in First Instance but the appeals court came to a different conclusion and sentenced him to 4 years.

The highly anticipated court ruling somewhat mitigates the blow members of the police force felt when the Court in First Instance did not give Damisse a life sentence but just 20 years, while Leon got off with 8 years instead of 25. But the appeals court did not feel justified to hand down a life sentence to Damisse, as the solicitor-general demanded at the trial on February 2.

“No matter how much the court has taken note of the misery that has been brought onto the Benjamin family, it has to consider consistent sentencing. It is true that the proven facts are extremely serious but in the opinion of the court the return of the suspect to the community must not be excluded forever.”

The appeals court also did not follow the solicitor-general in his second-best demand – the maximum temporarily prison term of 30 years. ‘However, the court is of the opinion that the sentence imposed by the Court in First Instance does insufficiently justice to the seriousness of the proven facts and the reprehensible attitude of the defendant.”

Damisse robbed the jewelry store on Front Street on august 5, 2015 together with Jovanny Leon. When he left the store after the robbery, police officer Gamali Benjamin stood on the other side of the road, pointing a gun at him and shouting “Freeze!”

Damisse practically emptied his gun with a salvo of shots that fatally hit Benjamin. His colleague threw himself on the ground and managed to injure Damisse. When the two robbers attempted to escape on a motorbike, they collided with a wall of the courthouse. Leon fled and Damisse was arrested shortly afterwards near the old fire station on Cannegieter Street. A couple of days later, Leon was also in custody.

The court concludes that there was a close and conscious cooperation between Damisse and Leon had, not only during the robbery but also during the subsequent shooting that was designed to facilitate their escape.  The court holds both men responsible not only for the manslaughter on Benjamin but also for the attempted manslaughter on his colleague Carti.

The court also considered that the remorse Damisse expressed in court is not genuine. In the prison he had a phone at his disposal and he posted Whatsapp and Facebook messages with texts that show he did not regret anything. Shortly after the trial in First Instance, Damisse shouted in the yard of Pointe Blanche to fellow-inmates: “Look these man dem wearing vest now! This is why we does aim for the heads.”

A psychologist who examined Damisse concluded that his emotional expressions were on display for effect. He is concerned up to a point about his victim and his family, but he is first and foremost concerned about himself, the psychologist concluded.

The appeals court found co-defendant Jovanny Leon guilty of the armed robbery, manslaughter on Benjamin, attempted manslaughter on the second police officer, firearm and ammunition possession and laundering jewelry. The decision overrules the lower court that had acquitted Leon of the two manslaughter charges. On appeal Leon received a 15-year prison sentence instead of the soft 8-year ruling from the lower court.

Somewhat surprisingly, cab driver Obed Cangieter also went down on appeal. The Court in First Instance had acquitted him of being an accessory to the robbery, but the appeals court came to a different conclusion and sentenced him to 4 years.

A week before the robbery Cangieter asked the mother of his goddaughter to shoot a video of the showcases in the Oro Diamanté store with a phone he made available to her.

When the woman became aware of the robbery she called Cangieter and asked if he had done it. “Not I, but my friends,” was his answer. The court links this statement to the frequent contacts Cangieter had in the period around the time of the robbery with Damisse.

The court furthermore established that Damisse got to know before the robbery where the most expensive jewelry was located in the store and notes in its ruling that this proves Cangieter’s role.

PHILIPSBURG, Sint Maarten — The Joint Court of Justice on Wednesday, February 22, sentenced R.D., the main suspect in the robbery of the Oro Diamante jewelry store on August 5, 2015 to 25 years in jail. On May 4, 2016 the Court in First Instance had sentenced R.D. to 20 years in jail.

The Attorney General had asked for 30 years in jail during the hearing of the appeal case 3 weeks ago.