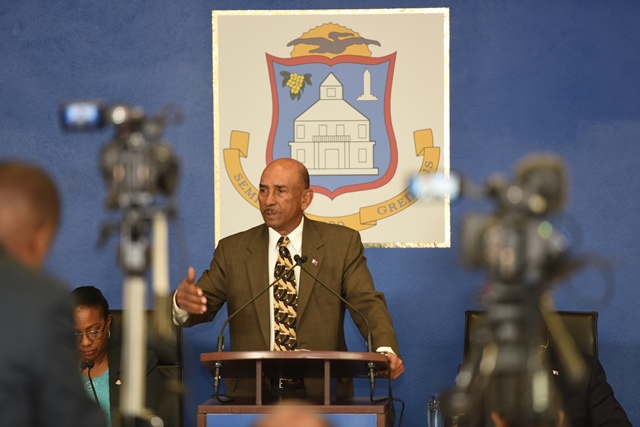 “The provisional numbers that we have for 2016 is that we’ve managed the budget in such a manner notwithstanding all of the difficulties. We were confronted with, in 2016 and ended up with a provisional surplus of 1.1 million guilders for 2016,” Minister Gibson stated.

“Bear in mind at the budget 2016, we started with reserving 20 million guilders from revenues to be able to pay the debts off the past. So in actual fact we really have 21.1 million guilders in extra revenues for 2016,” he continued.

The Minister noted that, “we started out with the backlog of 190 million guilders in debt in November 2015 when we took office. The way things presently look that debt will be reduced to 50,800,000 guilders in 2017.”

He recognized that government was headed in the right direction, but needed to tackle other areas that would add to government’s coffers.

He mentioned that, ToT has lagged behind in 2016, where approximately 7 million guilders were collected less in ToT than was budgeted. “That we have very little control over because it relates to the economy, amongst other things that we don’t know yet, but we are gearing up also the deal with that.”

He said, “the question is: Is everybody reporting as they should the correct amount in ToT that they have generated? As we stand now the assumption has to be that we assume good faith…until the contrary can be shown.”

Minister Gibson also informed that his Ministry was busy putting a team together that would “be knocking on people’s doors, and verifying did they pay to ToT. Did they pay taxes? Did they file properly?” In combination with the Tax Department, his Ministry is setting that up now.

The information gathered in the field will be shared with all of the departments, and appropriate action will be taken based on discoveries made. That would have a potential in generating an audit if one is not adhering to the rules and the laws.

Such a team will, “hopefully contribute to eliminating cheating, and identifying situations that should be rectified and get people to be compliant in all areas,” Gibson continued.

He mentioned meetings he’s had with managements of government-owned companies over the past weeks, and plans on continuing such meetings in the coming weeks.

Minister Gibson said that government-owned companies have to manage efficiently, and annually to produce a basic amount of profits, which has to be shared with the government. “So one of the things we’re doing is talking to them about what is a fair return for government. Once that fair return is established, then they’re being asked to start reversing the way they thought in the past. Not first spend on all the bells and whistles that they want, but think about what share should allocated to dividends, profits, and then think backwards, and take the steps to generate those profits. That’s the duty of management. And when those profits are generated they’re then shared, part in dividends, and part for investments and not all the investments they want,” he explained.

He also mentioned the departure tax charged by airport, and harbor fees. Gibson said, “What started with approximately a 5-dollar departure fee at the airport today, has mushroomed to 36 dollars per person…Then imagine the astronomical amounts that are generated by these companies only based on a regulation. Not based on efforts to produce profits. …When I look throughout the region I can’t find one country that does not charge a departure tax that goes in the coffers of government.”

“It is the reason why government always lives hands to mouth because,” those taxes do not go to government’s coffers, but are used instead to improve facilities at both those companies. “But I think the time has come that that be changed,” he stated.

According to him, Government has to cut budgets, while monies government should be receiving is being retained by these companies. “Our position’s going to be a 10 or 12 guilder departure tax that we have to receive for anyone leaving the island, just like any other country. Why should we be different? The argument has come up, ‘no, we can’t do that because we already charge a departure fee and we can’t put 10 guilders on top of that’…In actual fact they have our 10 or 12 guilders which they charge,” Gibson said.

“Again this is a process that we’ve started now and this is the idea. If we succeed in this path, it’s going to require also a law passed by Parliament, so it has to go through the pipeline. But theoretically if you think about 10 or 12 guilders times 800,000 passengers at the airport that already would produce approximately 9 million guilders in additional revenue for the government,” Gibson explained.

“At the harbor there you are dealing with 1.7 million guilders,” he said. Cruise ships are charged approximately $7 per tourist, “and I say, yes they have facilities, and they can charge for those facilities, but the government have 10 times more the facilities. We have the roads, the infrastructure in general. So, if they have a right to charge that amount, then government has the same right. I think this was a mistake made years ago, and the time has come that we correct it to get back to a normal situation, just as the cases in any other country,” Gibson observed.

Minister Gibson also mentioned that annual accounts have been pending from since 2012. “We came on in November 2015, and all of the annual accounts of government have been completed, have been submitted, and are in the pipeline, including the new annual account for 2015…We have done the work, which had not been done for many years in making sure those annual accounts, which is something that you need to be able to refer to, and to determine what your financial situation is annually,” he stated.

“Bear in mind before we came aboard for the year 2015, there was not even a budget for that year up to today. The audit chamber correctly made reports in the past pointing out the deficiency in these annual accounts, and the unqualified statement from the auditors for years we have not been able to obtain, because the information carriers of government do not allow the auditors with 100 percent certainty to be able to declare it’s correct,” Gibson continued.

“This is not a unique problem to St. Maarten. It’s a problem that you also find in Curaçao and Aruba. We have embarked on a path to curb or change this. The Audit Chamber has identified 12 areas that they are insisting upon that we take to be able to eventually get a qualified report,” Gibson noted.

“I can assure you the government is doing everything it can. And it’s my aim to be able to assure that we are doing so, and that we will improve the financial basis of the government of St. Maarten. …For the 2016 year, the annual accounts will come out later this year. You will find the same status as previous years with a small improvement. Because in 2016, all the time was spent in trying to get a budget approved because in 2015, there was no budget. So a lot of energy went into, with the instruction we had, in making certain that we had a balanced budget for 2016. As far as the annual accounts are concerned, it will be the same situation in 2017, but in 2018 you will see a marked improvement,” Gibson concluded.