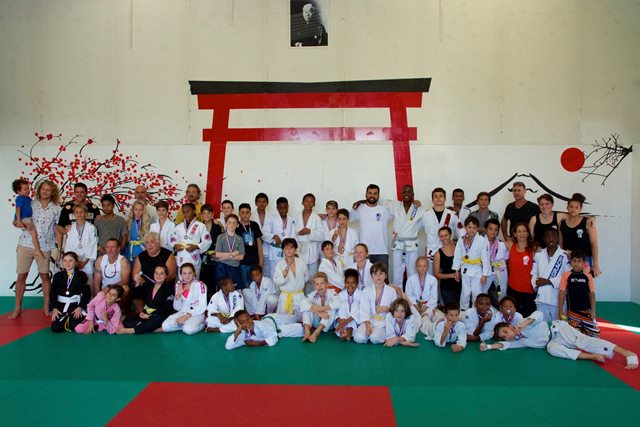 Some 55 athletes were represented by 3 teams: St. Maarten’s SXM BJJ/Team Renzo Gracie, St. Martin’s ‘Ecole de Judo’ and Saint Barths Ju-Jitsu team. Team SXM BJJ took 1st place in 6 out of 10 kids divisions and closed out (earned gold and silver) in 5 out of the 10 divisions.

He then faced 24-year-old MMA fighter Zack in a no-gi submission wrestling match. The crowd was treated to an exciting back and forth match that displayed a high level of proficiency. Ruben lost via submission, but displayed incredible heart and maturity.

Local ferry provider The Great Bay Express graciously sponsored the group of athletes, coaches and family members, who joined the team to lend support. SXM BJJ Head Professor Melissa Bardfield is very thankful to the Great Bay Express ferry for making the trip feasible for the team for the second year in a row.

Jiu Jitsu mom Yiselle Fuentes-Castillo also made a generous donation of two large boxes of bananas for the team to share.

All of the young athletes demonstrated great maturity and discipline and those who did not win their matches learned important lessons. Due to strict visa requirements to enter St. Barths many students who hold passports from other Caribbean nations were not allowed to enter the island.

SXM BJJ looks forward to showcasing the talents of the entire team and the next tournament to be held in St. Maarten in the spring.