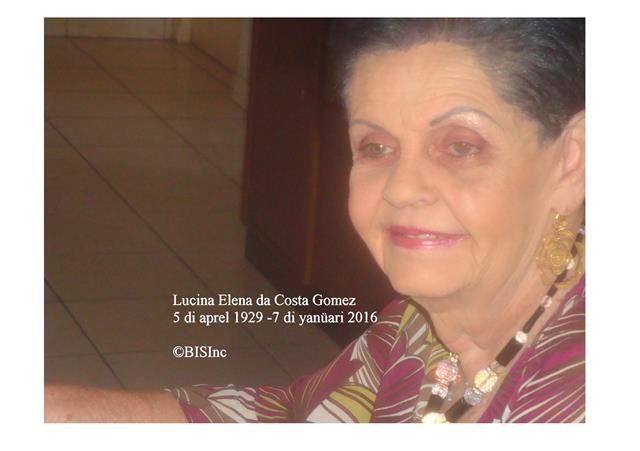 That was the last wish of the first female Prime Minister of the Netherlands Antilles and Curaçao Lucina da Costa Gomez.

The funeral took place at Crefona and was well attended, honoring the late Lucina da Costa Gomez, who as a politician in her time made changes in the laws giving women equal rights as men, thus marking a big step in the world’s efforts for equality for women.

She, as the minister, made it possible for women to have careers in uniformed jobs such as: police, custom officers, prison guards and coast guards.

Her friend Helga Mensing, in a final word, said that she had joined the female wing of the political party PNP “Forsa Femenina,” inspired by Lucina. Lucina had founded it to promote and upgrade women on a cultural, social, economical and political level.

“Lucina was a hard working woman and politically experienced. She always considered other people’s emotions. She was nice to deal with. That is why she always got all cooperation to effectively better the legal position of women in Curaçao, one of her biggest achievements during her political career,” Mensing said.

“History will prove that Lucina Elena da Costa Gomez was really concerned with the well-being of our country. She was first the political leader who inspired me to do women’s work, and later turned into a friendship that I will always value,” Mensing continued.

Lucille Berry-Haseth said, “Life is temporary and we always thought that people like Lucina came to stay with us forever.” She reflected on how as the Minister of Health and Social Well-being in 1970, Lucina had worked with much interest with the medical team in the Netherlands Antilles.

“Her focus was on equal rights for women. In 1975 she introduced the law to eliminate the law that legally handicapped married women. What made her a good minister was that she chose her assistants based on their professionalism and not on political reasons,” according to Berry-Haseth.

Former Prime Minister Maria Liberia-Peters explained that women like Lucina made a difference for all women, and that it is because of Lucina that she went on the list of the political party PNP, with the result that is now history.

Liberia-Peters also said that young people must be reminded how women in Curaçao have what they have, and if it had not been the determination of Lucina there would not have been the changes valuing the capacity of women.

“All laws in those days came from a structure where men were central and head of the household and responsible for their family. In daily, family life it brought certain difficulties with it. Like when a married woman was confronted with the fact that her husband had made debts without the wife knowing and a bailiff came to take away what was still not paid for. If Lucina had not changed that law, no educated married woman could have been a Department head, Lieutenant Governor or Governor,” she concluded.

Singer Aemy NiaFeliz, in the end, sang a song to celebrate the efforts of Lucina da Costa Gomez for the community of Curaçao.

Lucina’s achievements for women must stay remembered and we must inform young women about this.

May her soul rest in peace.