The interdiction and seizure of contraband was the result of ongoing multi-agency law enforcement efforts in support of Operation Unified Resolve, Operation Caribbean Guard and the Caribbean Corridor Strike Force.

During the afternoon of Jan. 2, 2017, the crew of a Customs and Border Protection maritime patrol aircraft on a routine patrol located a suspicious go-fast vessel just off the Dominican Republic.

The USS Zephyr was diverted to interdict the suspect vessel.  The Zephyr, operating with a Coast Guard Law Enforcement Detachment onboard, interdicted the go-fast, detained the four suspected smugglers and seized numerous bales which tested positive for cocaine.

The seized contraband and detainees were transferred by the Zephyr to the Coast Guard Cutter Donald Horsley for transport to Puerto Rico, where they were placed in the custody of Drug Enforcement Administration special agents.

„The strong partnerships and excellent coordination between the Coast Guard, the U.S. Navy and the federal law enforcement agencies involved in this case prevented this major drug shipment from reaching shore and delivered those responsible to justice,” said Capt. Robert W. Warren, Coast Guard Sector San Juan commander.  „Our collective efforts seek to secure our nation’s maritime border and protect the citizens of Puerto Rico and the U.S. Virgin Islands from this threat.”

„The crew of the USS Zephyr and the USCG Law Enforcement Team performed phenomenally well as they held station and interdicted the go-fast,” said Lt. Cmdr. Cameron Ingram, USS Zephyr commanding officer.  „This successful boarding led to the seizure of over 2,000 pounds of cocaine, furthering protection to our shores and contributing security within the region and homeland.”

„This is the result of a great and extraordinary interagency effort from the Caribbean Corridor Strike Force,” said Matt Donahue, Special Agent in Charge DEA Caribbean Division. „Undoubtedly, the cooperation in this joint investigation between DEA, FBI , HSI and USCG illustrates the great things law enforcement can achieve to combat drug trafficking in Puerto Rico and the Caribbean Region” 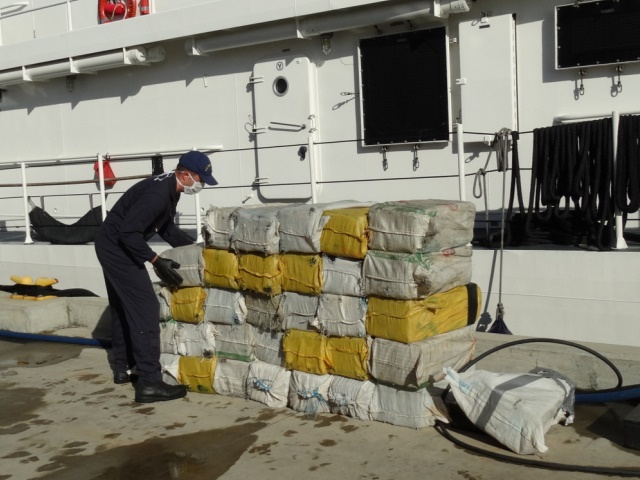 The Coast Guard’s efforts under Operation Unified Resolve contribute to the interagency results being achieved locally each and every day under Operation Caribbean Guard, which coordinates efforts between the Coast Guard, DHS and the Commonwealth and Territorial law enforcement partners, who are working diligently to deter, detect and disrupt illicit maritime trafficking to Puerto Rico and the U.S. Virgin Islands.