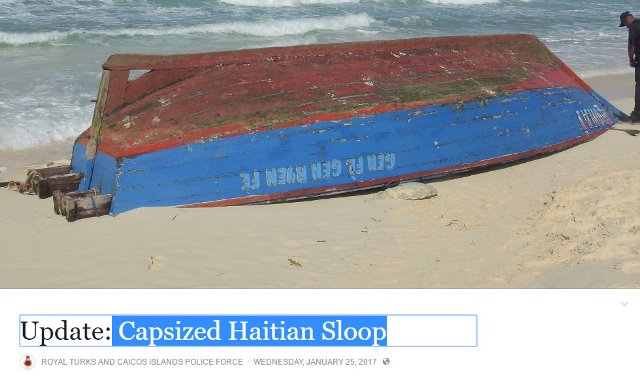 Turks & Caicos — Police and Immigration officials are continuing their search operation following an incident of an illegal Haitian Sloop which capsized in rough seas in the North Western Point of Providenciales yesterday (Tuesday 24th January 2017).
A twenty-three-year-old Haitian male was captured in the area, and he told police that the Haitian Sloop “Adonai” powered by one engine left Cape Rouge on Sunday 22nd January 2017 with sixty-nine souls onboard (fifty males and nineteen females). He said that a number of persons were below the deck and others were on top. As the boat approached land, he heard a loud sound as the vessel hit a rock and it began to sink. He was able to swim and save himself.
Following extensive searches, 12 bodies were recovered (eight females and four males).
Commissioner of Police Mr. James Smith said, “This is a tragic incident with significant loss of life and our condolences out to the families of those involved.”
At this time officials can only account for 13 persons with 56 still outstanding.
Persons within the Haitian Community with concerns regarding relatives can contact the Chalk Sound Police Station at 338-5901 for information.
Anyone who has information on the whereabouts of illegal immigrants who may have arrived on this boat is asked to come forward with any information or contact the Chalk Sound Police Station.
Further searches are ongoing.