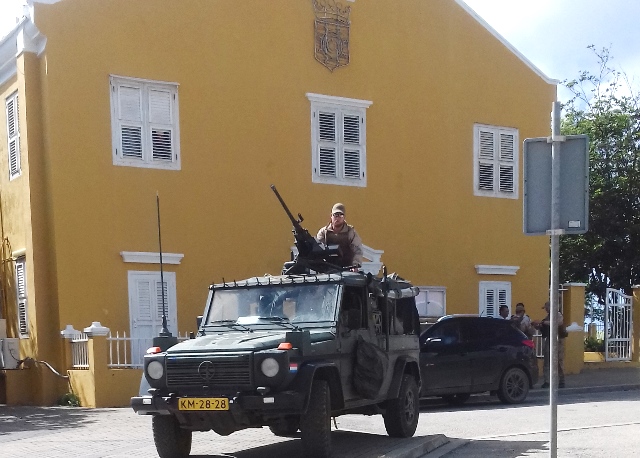 Having met at Bonaire, West Indies on December 1, 2016

Aware that the political status of Bonaire, St. Eustatius (Statia) and Saba was transformed in 2010 from being a part of the autonomous country of the (former) Netherlands Antilles to a new political arrangement unilaterally advanced by the Kingdom of the Netherlands akin to that of ‘partial integration,’ and characterized by serious political and economic inequality, rather than the promised political and economic equality originally envisaged.

Also aware that this new status is tantamount to unilateral annexation, and is wholly inconsistent with the minimum standards of full self-government and equality required on the basis of international principles of democratic governance,

Bearing in mind that the ‘public entity’ status does not reflect the wishes of the people of Bonaire who had previously selected a political status of “direct ties to the Kingdom” of the Netherlands in a 2004 referendum rather than the political status of “public entity,” which has been unilaterally and systematically imposed by the Kingdom since the 2010 dismantling of the Netherlands Antilles and the subsequent transition,

Also bearing in mind that the ‘public entity’ political status was formally rejected by the people of Bonaire in a 2015 referendum by a decisive ‘No’ vote of over 65 per cent, and taking note that discussions are underway for the conduct of a second referendum to be conducted, with United Nations (UN) involvement, so that the people can choose from a group of political status options of democratic governance and political equality,

Taking into account that the people of St. Eustatius voted in its 2005 referendum to remain within a restructured autonomous country of the Netherlands Antilles, but as the 2005 referendum results resulted in the dismantlement of that autonomous country, the Island Council of St. Eustatius subsequently approved a motion to accept the ‘direct ties’ arrangement offered to Bonaire and Saba, even as the people had not voted in favour of the status, and even as the nature of its political and economic inequality had not yet been revealed,

Also taking into account that the people of St. Eustatius in a 2014 referendum, under official observation of the UN Electoral Affairs Division of the Department of Political Affairs, formally rejected the imposed ‘public entity’ status by voting for a more autonomous status from a list of political status options, and recalling that the results of the 2014 referendum were formally certified and endorsed by motion of the Island Council on May 25, 2015 as a clear mandate of the people,

Alarmed that the Kingdom of the Netherlands, in spite of the democratically expressed wishes of the people of St. Eustatius and Bonaire in their rejection of the imposed political status of ‘public entity’ in 2014 and 2015, respectively, is proceeding through measures in the Kingdom Parliament to formally annex the two territories through a process of ‘anchoring’ the two islands in the Dutch Constitution, and further alarmed that this unilateral process of the Kingdom would result in a legitimization of the dependency status contrary to international norms of democratic governance and in opposition to the expressed will of the people of Bonaire and St. Eustatius,

Expresses its deep concern for the suspension of direct contact by the Government of the Kingdom of the Netherlands with the democratically elected government of St. Eustatius, as announced by the Kingdom Minister of Interior Affairs and Kingdom Relations on November 30, 2016, following on from a similar suspension in 2015, which lasted for a period of six months,

Further expresses its deep concern for the imposition of unilateral financial supervision which requires Kingdom approval for public expenditures by the Government St. Eustatius,

Recalling the Motion adopted by the Island Council of Sint Eustatius on May 28, 2015 which confirmed, inter alia, that the population of St. Eustatius had not yet exhausted all its options as far as exercising its right to self-determination in accordance with the Charter of the United Nations, and which reminded the Netherlands of its continued obligations towards St. Eustatius as part of the former Netherlands Antilles,

Taking note of the proposed ‘Raizal Statute’ submitted by the Raizal Authority of the archipelago of San Andres, Providencia and Santa Catalina to the Government of Columbia to modernize the political, socio-economic and constitutional relationship between the people of the archipelago and the State of Columbia, and affirming the self-determination aspirations of the Raizal people,

Also taking note of the “Assessment of self-governance sufficiency in conformity with internationally-recognised standards – Country Curaçao” undertaken in 2012 by the global Dependency Studies Project which found that the present governance model in place in Curaçao emerging from the 2010 dismantlement process of the Netherlands Antilles further reduced the level of self-government to a diminished autonomous model, and is not in compliance with contemporary international standards of full self-government,

and alarmed that the ‘public entity’ status imposed on the people of St. Eustatius and Bonaire had been misrepresented as a genuine status of political equality by the Kingdom of the Netherlands in 2010 at the dissolution of the Netherlands Antilles,