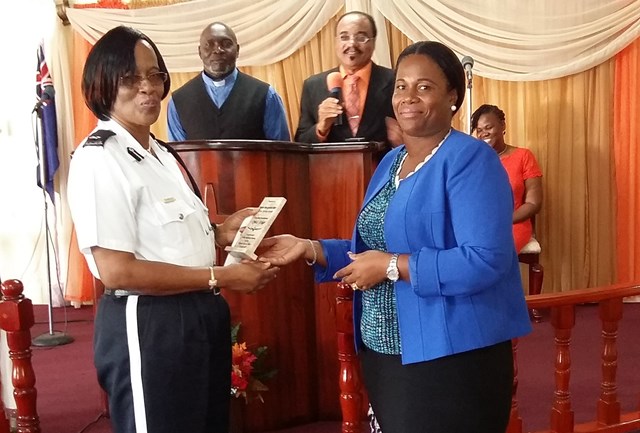 ANGUILLA – Some 30 members of the Royal Anguilla Police Force on Sunday, October 30, participated in the weekly Sunday morning worship service at the Kingdom Vision Apostolic Church in the Farrington.

This was a result of an invitation by the pastor and members of the church in order to recognize the hard and often time’s thankless work of the police. They also used the opportunity to anoint and offer prayers for the entire organization.

Apostle Elmead Allen, who is senior pastor of the church, welcomed the Commissioner and other officers to the service, and led in the various prayers and intercessions that were said for management of the RAPF as well as various departments that are often not seen. He was assisted by Pastor James Harrigan and Minister Anthony Thomas.

Commissioner of Police Paul Morrison, who was guest speaker during the service, spoke about the need for community policing and the role the church can play.

“The churches are focal points for many communities. It serves as a gathering place to meet and to worship. Congregations give support to each other and others who may be on hard times. We, the police and church, can work together with those who may be victims of crime where the church can provide a listening ear when the Police are unable give the extra time, and have not the time to stay that extra hour,” said Commissioner Morrison.

Pastor Allen, who gave a brief exhortation to the officers, encouraged them by using the acronym STAND.  He encouraged them to be sincere, thankful, have a positive attitude, never give up and to be determined at all times, as they carry out their job as law enforcement officers.

“Stand for personal and moral integrity. Stand for the oath of office you took as well as for your commitment in the words of your mission statement. Stand when others choose to give up and bend and most importantly in a world where everything is shaking I challenge us this morning to stand,” said Pastor Allen.

During the service the police department was presented with a plaque of appreciation for the work that the organization continues to do with in the Anguillan community. The longest servicing member of the RAPF, Acting Superintendent of Police Sylvia Hodge was also recognized and presented with a plaque for her commitment and dedication to the RAPF with 33 years of service.

In accepting the prestigious award Ag. Superintendent Hodge said, “Being an officer is a job which requires strength, diligence and a keen disciplined eye and demeanor. It is a job where sometimes you receive resistance and no thanks or praises for doing the right thing.”

The service was well received by all the officers who attended.