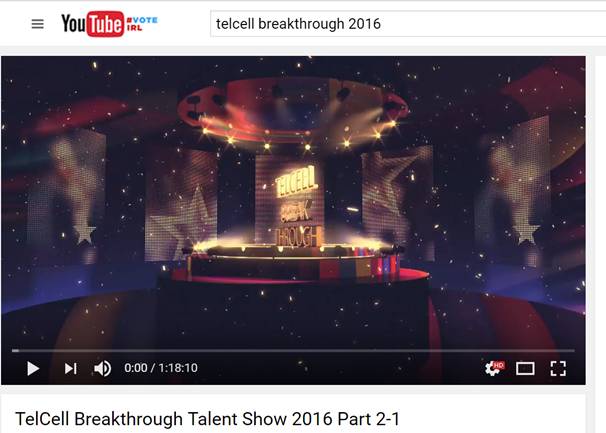 POND ISLAND – St. Maarten music and entertainment fans can now visit the popular internet video channel YOUTUBE for a professionally edited version of the TelCell Breakthrough Talent Search finals that was held at the Casino Royale Theatre, in Maho, on October 1.

The spectacular event was filmed for the fourth year running, and immediately went into the editing room for release last week to a wider audience around the world via Youtube.

The island’s major youth event can also be seen on the TelCell Breakthrough Facebook page.

According to co-event coordinator Angel Richardson, the show is split into two parts and can be accessed via the following Youtube links:

“Thanks to the great editing work of Joel Ayuk and his team from Cani Films, we have something really wonderful coming from St. Maarten that showcases the talent we have locally to a global audience,” said Richardson.

“We are always saying how good our talent is, and now we are happy that we can share that talent with others,” she continued.

Richardson thanked Coordinator of TelCell Breakthrough Berteaux “Mr. Rude” Fleming of Xtratight Entertainment for his continued support, and his promise to also promote Youtube exposure of the TelCell Breakthrough winners through the many channels that he also has access to.