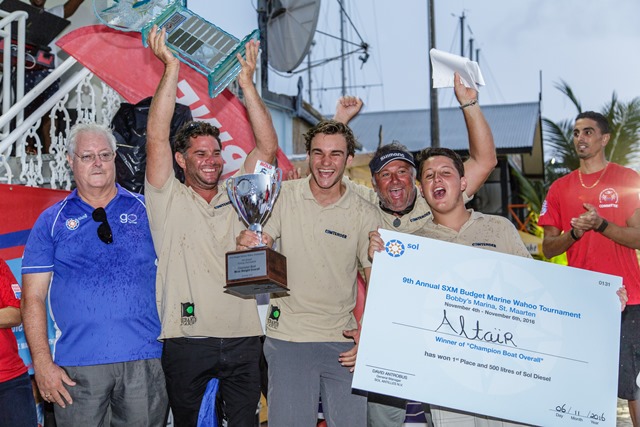 PHILIPSBURG – Altair from St. Barths, was crowned champion boat for 2016 after catching 15 wahoo over the weekend, totaling 528.2lbs.

On day 1 of the competition, fishing team Altair jumped out as leader for the day with 11 wahoos caught, totaling 427.2lbs of fish, second place was Tahla’O from St. Barths with 9 wahoo, carrying a total of 281lbs of fish.

Day 2 saw a few surprises. First boat to the scales was Turn and Burn from St. Croix with a total of 15 wahoo, after not being able to fish on day 1 due to engine failure. However, their day 2 catch of 360lbs of wahoo catapulted them into second place overall.

The top boats from day 1 had slow days and could not repeat their day 1 catches, making the final results of the tournament much closer than originally anticipated.

Blue Crush from Saba showed up to the docks with a whopping wahoo weighing in at 65.9lbs, caught by their junior angler.

A few minutes later defending champions Tahla’O came to docks and started offloading fish, in total 11 wahoo and 1 yellow fin tuna, with their day 1 and day 2 catches propelling them to the champion boat for the second time.

Prizes were given for:

Jamaal Klaber on Blue Crush from Saba with 46.9lbs Wahoo; 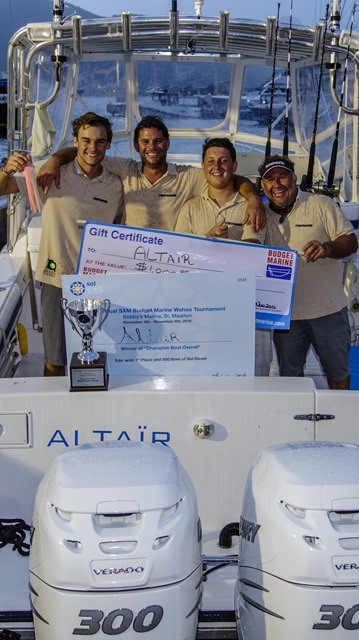 Level 2: The Wahoo jackpot (a newly introduced category for 2016 and onwards)

Organizers of the event thanked their sponsors, and participating fishermen for making this 9th annual Budget Marine fishing tournament such a huge success, and one of the greatest so far.

Organizers also quickly pointed to next year’s event, which will be their 10th annual wahoo tournament. All intentions are to again raise the stakes and prizes for another great fishing competition.