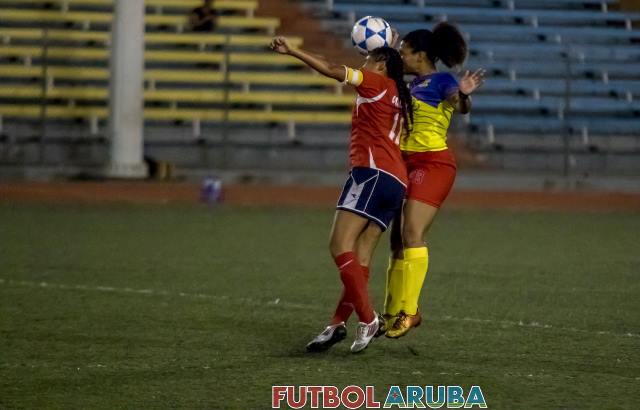 The Football Federation of Aruba organized a women’s football expo during that weekend to promote women’s football. Oualichi WST has played against the other islands in the Kingdom such as Bonaire and Curaçao in the previously held Dutch Caribbean Cup. The Aruba competition, was a continuation of the efforts of the association to continue to develop the female players on St. Maarten and compete against the sister islands to improve the level of the players.

The team played against S.V. Britannia on Saturday, October 15, at the Stadion G. Trinidad. S.V. Britannia is the champion of the 10 female teams league in Aruba. The Aruban team won 3-0 against Oualichi WST.

The first half of the game S.V. Britannia managed to score 3 goals and although both teams were on different levels Oualichi managed to hold that score in the second half and making it impossible for the Aruban team to make more goals. This was also the first game that Oualichi played where the referee officials were all women.

St Maarten female football still has a long way to go in comparison to the sister islands. The goal of Oualichi is to continue to develop the female players on the island to provide for a stronger competition regionally and internationally.

The team would like to thank the entire community for donations that were made during the fundraising events and the sponsors such as NAPA and the St. Dominic Parents Teachers Association for their contribution to the fundraising efforts of the team. Full coverage of the stay of the team in Aruba can be found on the Oualichi Women’s Soccer Team Facebook page.