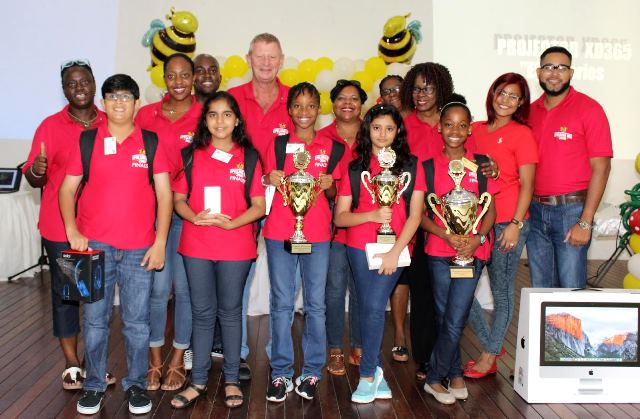 These four girls and one boy were joined by a large crowd of family, friends, classmates and teachers to support and cheer them on.

The Scotiabank Rotary-Rotaract Spelling Bee was held in three consecutive rounds. The first round, the Preliminary Round had 38 participants from 17 schools, and the children had to spell the selected 20 words on paper. The top 15 highest scorers from the Preliminary Round went onto the semi-finals. The 15 semi-finalists from eight schools had to spell out their words into a microphone in front of the judges. The top five highest scorers from the semi-finals went on to the final round. 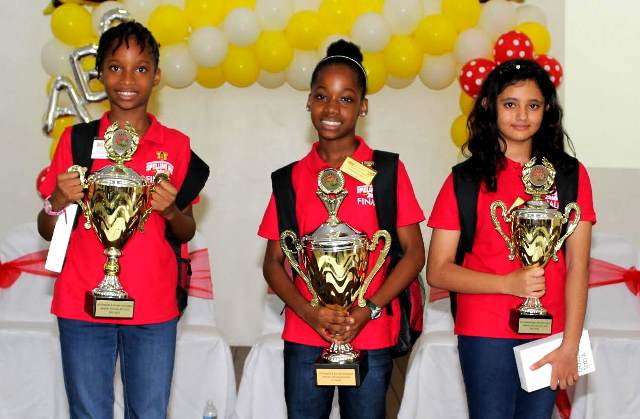 In the final, there was a tie for first place between Syandra Caesar from St. Dominic Primary School and D’Shenay Gayle from Methodist Agogic Centre (JAG Campus). These two girls then had to do a spell-off, with each girl having 20 extra words to spell. The tie was broken and the winners and runners-up were announced.

St. Dominic Primary School won an HP printer for being the most supportive school. The schools from Anguilla were given a special mention as they had travelled to St. Maarten to support the participants in the final round even though neither of their participants had reached the final round. St. Dominic Primary School was also awarded a desktop computer and a printer as the prize for the winning school.

Spell-offs were conducted amongst spectators, who received TelCell top-up cards as prizes. The 40″ TV donated by Shop and Take to show the spelling of the words to the audience was also raffled and won by Shalisa Fleming. Two LG phones donated by TelCell were also raffled.

The five finalists were asked for their comments on the Spelling Bee, and these ranged from, “it was good;” “it was fun;” “it was a lot of words;” “they learnt many new words;” and “there was a lot of studying that had to be done.”

Mid-Isle took the opportunity to thank Scotiabank, the main sponsor of the Scotiabank Rotary-Rotaract Spelling Bee 2016, along with gold sponsors the Princess Juliana International Airport (PJIA), Smitco and GEBE, and silver sponsor UTS, and the other sponsors without whose help “we could not have had a successful Spelling Bee.”