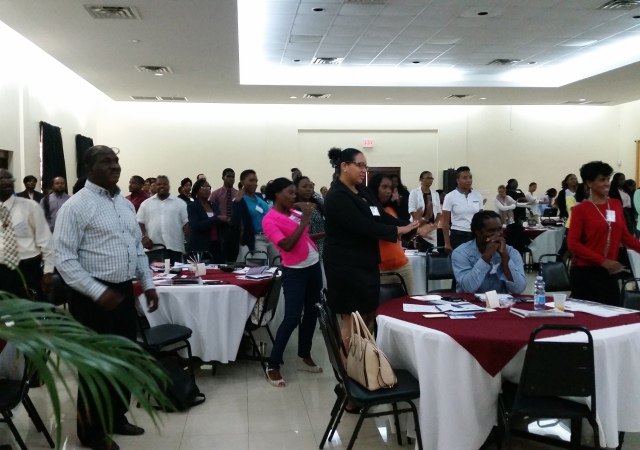 PHILIPSBURG – “Globally, and locally, in every sphere of our societies, leadership is challenged as scandals and cries of corruption, and injustice are being lamented daily,” Victorious Living said in a release.

Consequently, Victorious Living Foundation (VLF), under the leadership of its visionary Dr. Erna Mae Francis-Cotton, board and volunteers have been consistently charting a course to develop leaders worth following.

For the past four years, Victorious Living has teamed up with the international brand Leadercast to create leaders worth following and have seen tangible results through the lives of its participants. Many of the local attendees at the simulcasts of the powerful leadership events Leadercast; and Live 2 Lead hosted by leadership expert John Maxwell, attribute their growth and success to the knowledge and inspiration gained at these events.

In VLF’s quest to continue to stimulate leadership values of integrity, authenticity, people first, excellence and discipline, they have created Victorious Living’s Leader Worth Following Awards. In appreciation and recognition of the commitment shown by Victorious Living’s Leadercast attendees to their own leadership development, attendees were invited by VLF to nominate two community leaders they deemed worth following.

From the ten submissions, five finalists emerged based on the five leadership values of Integrity, Authenticity, People‐First, Excellence and Discipline; in the category “beyond you leader.”

The finalists were chosen by VLF’s committee based on the information their supporters provided. The five finalists are: Dr. Alicia Liverpool of the David Company; Executive Director of Hillside Christian Schools Asha Stevens; host of Love and Inspiration Roy Cotton Jr.; Jim Rosen, Advisor to the Minister of VSA Emil Lee; and the youngest nominee, Mhakeda Shillingford of Patrol to Eradicate Paedophilia and child molestation (PEP).

Over 300 votes have been cast already for the nominees with Liverpool and Stevens having the highest number of votes at press time. Voting for the top two nominees continues until Tuesday, October 4. Therefore the general public is invited to choose their leader worth following among the finalists.

Persons interested in showing their support to the nominee of their choice can vote at: http://doodle.com/poll/8pch54gteaxbdqg3 and on Victorious Living’s Facebook page: https://www.facebook.com/Victorious-Living-Foundation-65961818422/.

Victorious Living empowers, enlightens and reconciles families, communities and organizations and transforms people’s lives. Therefore the proceeds from the event goes toward empowering youth and families, who ordinarily could not afford coaching or counselling services to transform their life situation.

Victorious Living unveiled more about this life-changing event on Friday, September 30 at 12:00pm on View Point, hosted on 102.7FM or http://pjd2radio.com/.

“Everything rises and falls on leadership” as bestselling author and leadership expert, John Maxwell states. Therefore Victorious Living commends all political leaders who vied for the parliamentary elections 2016 for desiring to lead St. Maarten in the right direction.

VLF congratulates the newly elected NA-UP led Government as they prepare to serve the people of St. Maarten for the next four years.