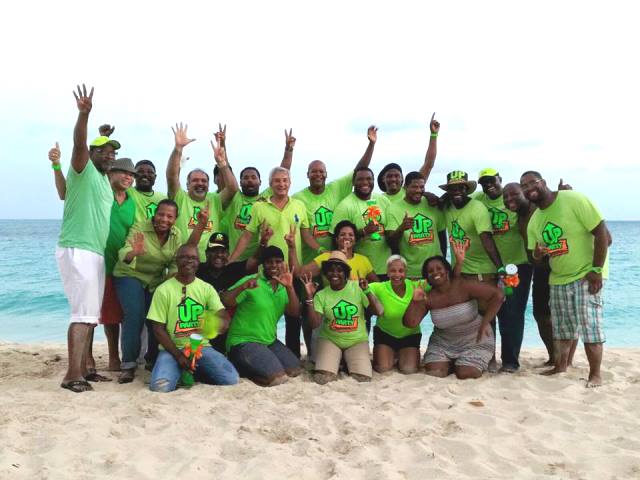 PHILIPSBURG – As part of the United People’s (UP) Party’s groundwork to deliver a stable government to the people of St. Maarten, after more than five years of instability, 23 UP candidates contesting the September 26 Parliamentary elections held a team building session in Simpson Bay, Sunday, August 14.

The party issued a press release following the event, stating that the team building event was a huge success. It was a “common purpose” exercise geared towards improved productivity, motivation and establishing a closer bond, especially with the new members of the UP family.

Member of Parliament (MP) Leona Marlin-Romeo said after Sunday’s event “today was one of the best political team activity I ever had.” She encouraged her colleague candidates on the UP slate to continue this momentum. MP Marlin- Romeo UP candidate #6, joined the party earlier this year, after first running with another party to contest the 2014 Parliamentary Elections. She expressed confidence in Team UP because she feels her contribution to the people of St. Maarten would be best made with a team that shared the same vision.

She along with MP Dr. Cornelius De Weever, who also joined the UP Team this year have both publically expressed their pleasure in being part of the UP party’s movement calling it a “unified team whose interests are clearly aligned with our goals of improving the living conditions for everyone on St. Maarten and creating a better and stable economy.”

UP Party leader Theo Heyliger stated since the beginning of this month one of his party’s main focus during the campaigning for this election will be to provide a stable government for the people. During UP’s launch of candidates on August 3, Heyliger told party supporters “with the departure of the individuals whose self-interests have resulted in the dismantling of the former government,” he is confident that he now has a list of committed individuals whose real love is Country St. Maarten.

During Sunday’s event, there were three team building exercises: Survivor Scavenger Hunt, Take one for the team and Relay Races, each of which gave the candidates an opportunity to work together in order to achieve the ultimate and common goal. Besides the fun and games and the opportunity to enjoy one of St. Maarten’s finest beaches, the team sat and ate together and mingled and exchanged ideas on how to move St. Maarten forward.

The relay race was especially exciting and included hula hoop, bag jumping, and bob for apples, walk a lime and spoon, then burst water balloons before each participant returned to where they started and tagged their partners to continue. The winning team was MP Heyliger, MP Marlin-Romeo, UP #17 candidate Dione Trustful, and former Tourism Minister UP #11 Claret Connor.

According to the UP Party, decades of studies have shown that there has been a steady transitioning from promotion of a competitive team environment to a cooperative team. In recognizing the many struggles Country St. Maarten has had since 10-10-10, Heyliger said, “in order to effectively handle the people’s business, we have to put even more emphasis on team building and make sure each candidate supports the philosophy of country above self.”

He said that the lessons on collaboration and trust were essential in order to ensure a stable party. The idea that individualization and competition is not part of the UP team is a key factor in Heyliger’s promise of a stable government and a full governing term of four years.

He said, it is this reason why he has been calling for a united front in combatting the problems of the country. He said, “When we work as a team less time and energy is put into settling individual ego or greed-related issues, which in no way benefit the people who voted us into office.”

He continued, “With a cohesive team in Parliament and a full mandate by the people of eight seats outright, we are better prepared to deal with identifying ways and means of improving the living condition of the people of St. Maarten, while at the same time implementing policies and new processes to grow and stabilize the economy.”

Photos of the event can be seen on the UP Facebook Page https://www.facebook.com/upparty, or the party’s website: www.UPParty.com. The event’s hosts were UP #14 candidate May Ling-Chun along with UP party supporter Clarence Derby, and was organized by the UP Team.