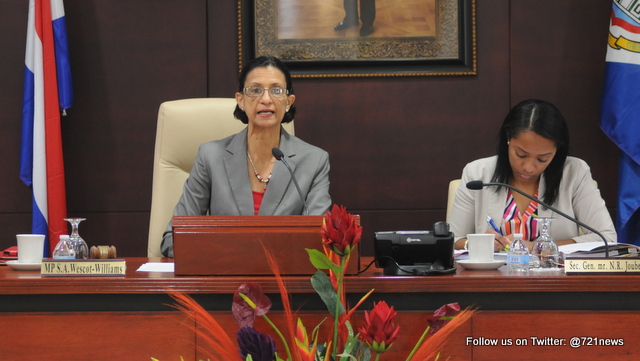 PHILIPSBURG, Sint Maarten – Parliament invites the public to send in nominations for the Annual President of Parliament Award.

The application documents are on the parliament’s website.  Persons have until August 15, 2016 to submit their nominations.

The website address is: www.sxmparliament.org and can be found under the documents section of the site.  Select the link and you will be able to download the application form.

The purpose of the award is to honour young persons on Sint Maarten that are a great example to the youth and who have contributed positively to the community and the country.

Nominations can be submitted by any citizen of Sint Maarten who believes that the individual that he/she is nominating meets the criteria.

The eligibility criteria are: the candidate must have the Dutch nationality and/or has been legally residing in Sint Maarten for 10-years or more consecutively, and has been registered in the Civil Registry for that period of time; must be between the ages of 15-24 years; has made a worthwhile contribution to the development of the community and the country; these contributions/achievements must have taken place within the last three years; contributions/achievements must have been made while the individual was acting as a private citizen, not as an appointed or elected government official; and must have demonstrated capacity for leadership and ability to motivate.

An award committee will be established each year consisting of three members of Parliament.  Members of the committee will review the nomination documents prior to the selection meeting and select three nominees.

During the selection meeting, the President of Parliament selects the recipient of the award based on the recommendations of the award committee.

The award will be presented yearly to the recipient during the reception ceremony at the Opening of the Parliamentary Year.