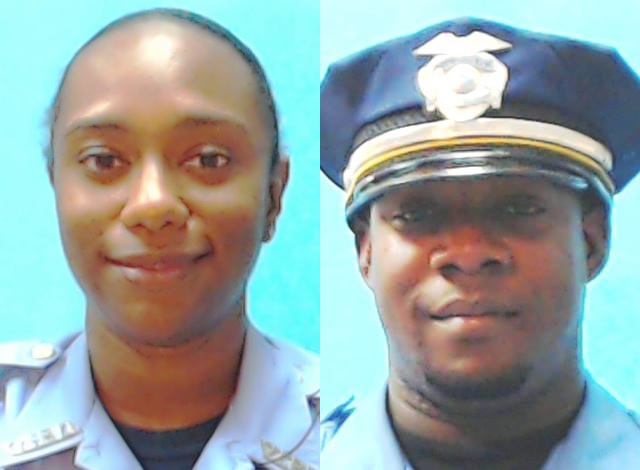 ST. CROIX — Governor Kenneth Mapp and Police Commissioner Delroy Richards took to a podium at Government House Thursday evening to address the people of the territory following news that two off-duty police officers had been slain last night at a beach in Hams Bluff, Frederiksted.

The leaders were set to address residents and the press at 5:30 p.m., but the governor and Mr. Richards were speaking with the victims’ families, sharing consoling words and promising to leave no stone unturned in bringing justice to those responsible for the police deaths. The territory-wide address started just after 6:00 p.m.

Government House, as ordered by the territory’s chief executive, released the identities of the slain police officers, including their biographies.

A police officer is seen in the distance investigating the crime scene at a beach in Hams Bluff, Frederiksted, where two police officers were shot to death on Wednesday night.

Officer Lesha Lammy, 30, above left, joined the police force on December 13, 2010 as a police recruit, and was promoted to the V.I.P.D. on June 26, 2013. Ms. Lammy, who was assigned to the Wilber Francis B Command on October 4, 2015, leaves behind three young children, according information provided by Government House.

The governor shared with the media details regarding the incident, stating that other pertinent information was being held in confidence because an investigation is ongoing.

Earlier today, Mr. Richards told this publication that the incident occurred less than 24 hours ago, adding that it most likely happened last night, as one of the officers was supposed to report to duty Wednesday night but failed to do so.

“We know for a fact that one officer was supposed to report to duty last night and he didn’t show,” Mr. Richards said. “What we’re looking at is that it happened within a 24-hour time period, based on folks who had seen him [the male victim] prior.”

Entrance leading to Hams Bluff — near the crusher in Frederiskted — where the double homicide of police officers occurred Wednesday night.

The bodies were discovered this afternoon on the sand by two individuals who came to the area to catch whelks, Mr. Richards said. He said V.I.P.D. detectives were speaking to several people, and would share more information once he’s able to combine the various moving parts of the story.

Earlier reports suggested that police were on the hunt for one of their own, but Mr. Richards said he would not deny or confirm said reports.

“I’m going back to the office to sit with everybody and see what they have, and then we move forward,” Mr. Richards said. He then expressed grief, which was already apparent on his face.

Police vehicles lined the side of the small path, and officers could be seen talking among themselves, visibly disturbed by the occurrence.

“It’s a tragic day,” Mr. Richards said, describing the male officer as “very good,” and the female as having served for multiple years with the V.I.P.D.