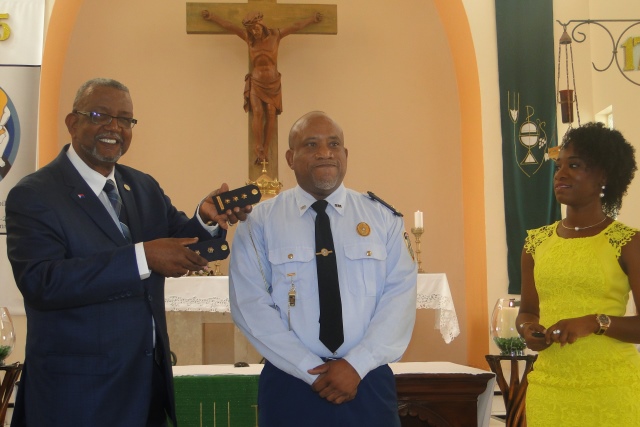 PHILIPSBURG, Sint Maarten — During the church service held at the Roman Catholic Church on International Justice Day, the Minister of Justice was granted the opportunity in the presence of those attending the service to officially honor the Chief of Police Carl John by replacing his rank insignias of commissioner to Chief Commissioner of Police.

The Minister congratulated the Police Chief for the tremendous job that he is doing considering the limited means he has at his disposal, and encouraged him to continue to serve and protect the community of St. Maarten in the best manner he can.

During his short speech to those attending the church service, Chief Commissioner John stated that he gladly accepts this honor by the Minister of Justice on behalf of all the officers and other staff in the police force, who on a daily basis go out and perform their duty. He said these are the persons that really deserve this honor.

The Minister did not only choose the right day, but the right place to honor him, and for that he is very grateful. “It is not about Carl John getting another star on his shoulder, but about accepting the responsibility of leading the Police Force of St. Maarten to serve and protect the community the best way possible,” the Minister said.

Finally, the Police Chief thanked his family and asked them to continue to support him during the many challenges that he will encounter and congratulated all colleagues on International Justice Day.