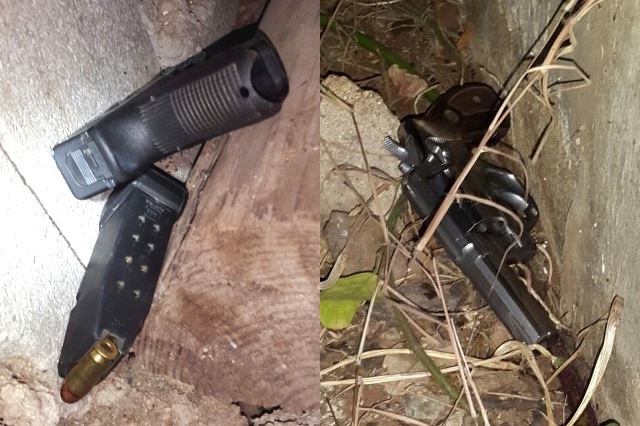 PHILIPSBURG, Sint Maarten — During a routine patrol by police on Friday July 15th at approximately 06.00 p.m. in the Fort Willem area, the driver of a gold colored Hyundai Accent which was very heavily tinted was ordered to stop.

The driver of the vehicle refused to stop an increased speed in order to flee from police. The police chased this vehicle through the Fort Willem area. During the chase two suspects managed to jump out of the vehicle and took off on foot through the area.

When the driver of the car noticed that there was no way out he also jumped of the vehicle and fled on foot. The area was surrounded and one of the suspects was arrested in the vicinity of the Prince Bernard Bridge.

During a search of the area where the suspects fled, a loaded pistol and a revolver were found and confiscated. The suspect was taken to the Philipsburg Police Station for further investigation.

During a search of the home of the suspect a small amount of marihuana and several different caliber bullets were found and confiscated. The suspect remains in custody for further investigation.