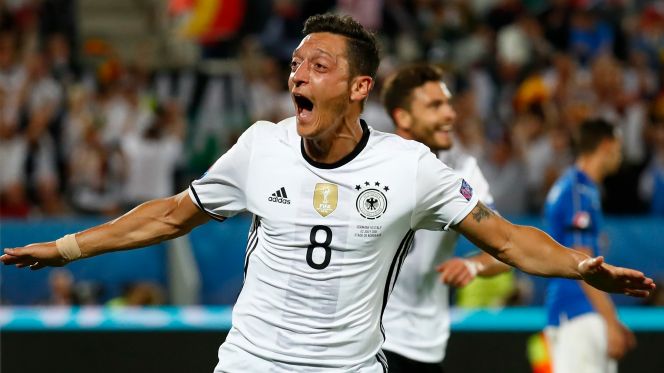 ~ They scraped past Italy for the first time in history ~

Gigi Buffon couldn’t look during penalties, but the rest of the world couldn’t look away as Germany scraped past Italy to beat them in a major competition for the first time in history.

Germany don’t lose on penalty kicks. That’s just a given in international soccer. But they also don’t beat Italy in major tournaments, having failed in their previous eight times.

And yet the Germans went out and missed more penalty kicks against Italy than they had in their last 24 years combined, then beat Italy. It was very un-German and as successful as ever, which is becoming a theme for Joachim Loew’s men.

This is an unconventional coach in Loew, playing an unfamiliar tactical system with a fresh crop of German players bailing out the older stars — Thomas Muller, Mesut Ozil and Bastian Schweinsteiger all missed penalties — all coming together for this new-look Mannschaft that looks purpose-built to make history.

After Germany’s stagnation in the 1990s, leading to the the great disaster of Euro 2000, they restructured their entire system from the ground up, implementing academy standards across the country and laying the foundation for the success we’ve seen in the last few years. Their new efforts produced players like Jerome Boateng, Toni Kroos, Ozil and Muller, and their new proactive, high-energy possession-based style has caught the world in its throes, culminating in a mindbending 7-1 win over hosts Brazil on their way to a 1-0 extra-time victory against Argentina to lift the World Cup.

Now this new Germany faced an old foe in Italy, whose three previous tournament meetings left the Azzuri celebrating in the face of German tears, and whose own new-look Italian side mirrored those of the past with its menacing defense and fearsomely passionate tactician, Antonio Conte.

Joachim Loew’s new Germany is a flexible one though, and he mirrored Conte’s 3-man backline in order to man-mark the Italian strikers and exert pressure on Italy’s fantastic ballplaying center back Leonardo Bonucci. Loew abandoned the traditional German 4-2-3-1 formation and paired focal point Mario Gomez with Thomas Muller up front, pressing the Italians high and forcing them to bypass the midfield.

Joshua Kimmich is perhaps the most sterling example of Germany’s new un-Germanness: a 5’9″ wisp of a boy who looks better suited as a Justin Bieber backup dancer than his role as the new Philipp Lahm. At just 21 years old, the little man from Rottweil is not only supremely technically gifted, and able to play in a multitude of positions and formations comfortably, but possesses an icily calm demeanor, stepping up to stroke his penalty home without a second blink. Kimmich was made famous after Pep Guardiola decided to give him a very loud and intense individual training session in front of 81,000 Dortmund fans directly after a fantastic performance at the heart of the Bayern defense, completely nullifying the mercurial Pierre-Emerick Aubameyang on the day.

Kimmich, like many of his national team, has benefitted not only from the newly instituted systems in place in Deutschland, but from the direct tutelage of Pep Guardiola, with his obsessive attention to tactical systems aiding their seamless shift. Germany’s back three was composed of the best representatives of Bayern Munich, Borussia Dortmund and Schalke 04, and this national team is an incredible representation of the incredible strides made within the country.

It took 120 minutes, incredible penalty drama, and plenty of heart-stopping moments in between, but Germany are through to the semi-finals as expected. It’s taken a version of Germany no-one expected to get there, though.