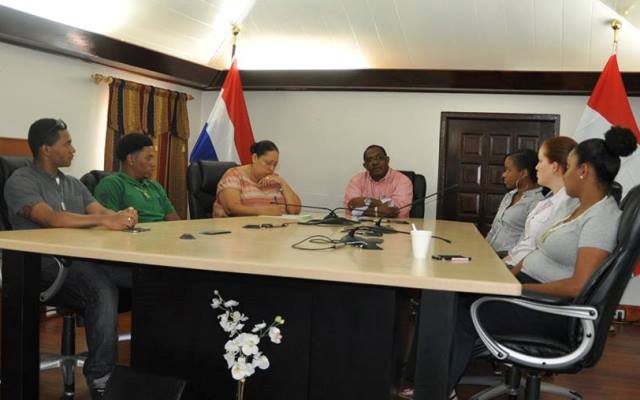 THE BOTTOM, Saba – On Friday, July 8, Commissioner Rolando Wilson had a meeting with interns participating in the Summer Internship Program of the Public Entity Saba.

During this meeting Commissioner Wilson discussed his portfolio with the interns, and gave an overview of various current and upcoming projects. Also at the meeting were, Head of Economic Affairs Dave Levenstone, and Head of Public Health Dr. Koen Hulshof.

Each department head also discussed various elements of their domain and encouraged the interns to give feedback and suggestions. The interns were then able to give an update on their internships and their views of the program, as well as ask questions of the Commissioner and Department Heads.

Joining the meeting was Acting Governor Franklin Wilson, who facilitated a discussion with the meeting’s participants about students studying in the Netherlands, USA and Barbados. It was decided that while the university students are home for the summer, a summit will be held, where all university students and prospective students can come to discuss their experiences and concerns.

The Summit will be held August 3, and will be titled, “A Window to The Future.” Commissioner Wilson is looking forward to the summit and believes that this will create a better platform for communication between the Public Entity Saba and students abroad.