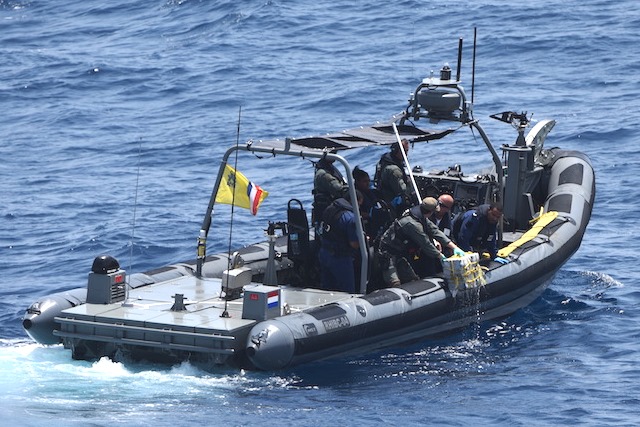 PHILIPSBURG, St. Maarten – The Zr.Ms. Groningen, the Dutch station ship of Defense performing guard duties at this time in the Caribbean, at about 23:00 Friday, July 15th, 2016 chased a suspect vessel that fled without lights at high speed towards St. Maarten.

The Frisc, the fast interceptor boat of the Zr.Ms. Groningen, with a boarding team on-board gave chase to identify the vessel and just after midnight the Frisc managed to get the vessel, and three members of the Coast Guard boarding team boarded.

During the conversation with the two crew members of the vessel, a man was found in the water near the two vessels.

This man was taken aboard the Frisc. The man was completely naked and said that he has long been swimming in the water and that he came from Venezuela.

He said he was going fishing with four other friends and that their boat had sunk. This statement did not seem to match the physical condition of the victim, however the Zr. Ms. Groningen and a second Frisc performed a search around for the multiple possible drowning, but they were not found.

On Saturday, July 16, the Zr.Ms. Groningen found five packages from the water which was extracted and found to have cocaine. They were spotted by a lookout of the station ship, and the NH90 helicopter after which the Frisc was deployed.

While the NH90 conducted a reconnaissance flight at the time the first packages were simultaneously removed from the water by the Frisc. The helicopter subsequently also picked up two packages. Further investigation showed the amount of drugs to be 128 kilos of cocaine. The packages are transferred to the Coast Guard authorities in St. Maarten.

It is being investigated whether the interception of drugs has to do with the action from the day before, since the packages were found near the location where the day before the small vessel was intercepted.