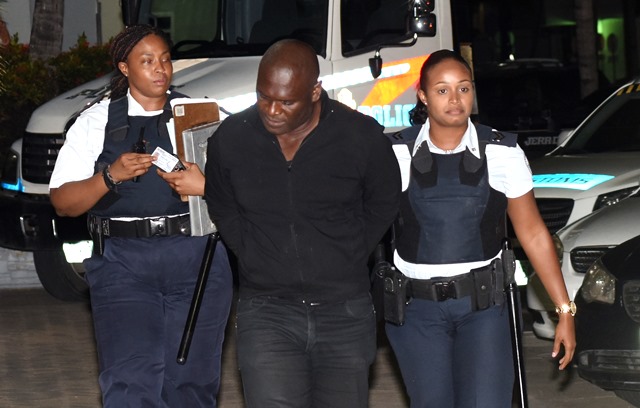 UPDATE MR WYATTE HAS BEEN RELEAD ON ORDER OF THE PROSECUTOR !!!!!

PHILIPSBURG – On Wednesday, July 6, at 9:15pm police arrested a male suspect with initials E.R.W. (45), who appeared on the Interpol most wanted list, for crimes committed in the Dominican Republic.

The arrest took place at Starz Casino in Cupecoy after information reached the Police Department of the suspect being in that area at the time. After the information was verified by the Police Department that this suspect was indeed listed on the most wanted list of Interpol, police patrols were directed to the location to conduct an investigation.

Prior to conducting this investigation, the Prosecutor’s Office was informed of the situation and granted the officer permission to make the arrest. On the scene, investigating officers confirmed the identity of the suspect and the arrest was made without any incident. The suspect was then brought to the Philipsburg Police Station where he was placed in custody pending further investigation.

The investigation has shown that the suspect has both Dutch and Dominican Republic nationality. The Police Department through the Prosecutor’s Office will be contacting authorities in the Dominican Republic to discuss the legal steps, which have to be taken to deal with this case.

The media will be informed regarding the progress of the investigation as it continues.

PHILIPSBURG, St. Maarten – 721news recently posted pictures of several suspects, who are wanted by Interpol on its official website and Facebook page.

One of the wanted criminals was Elisidro Richardo Wyatte. Thanks to the alert community at large, police received a major tip from the community that he had been spotted at a casino in Lowlands on Wednesday night, July 6.

The Police Multi-Disciplinary Team moved quickly and mobilized officers to the area and arrested him on the spot.

According to international website Interpol, he is wanted for violence against children. They, however, did not specify the exact charge or charges against him. 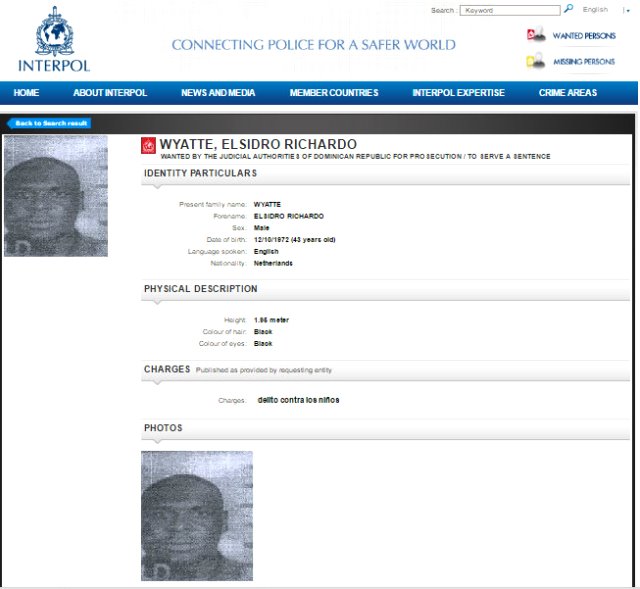 Local Interpol Authorities will start exchanging information with Interpol Dominican Republic to verify that he is still wanted, and if so he will have to face an extradition process, to face the accusations against him in the Dominican Republic.

Wyatte was driving a white sonata, and police confiscated the vehicle immediately.

Below are some suspects that are still on the official website of the Interpol list, and in one way or the other have links with St. Maarten.