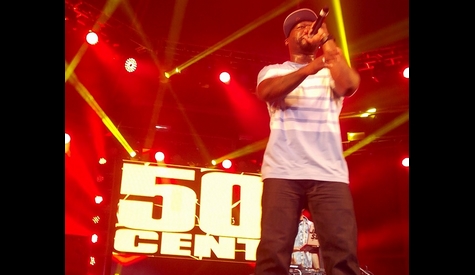 “Fiddy,” Curtis James Jackson III, was arrested in his dressing room at the Warner Park Stadium and taken to the Basseterre Police Station where he was charged with Making Use of Indecent Language.

His bodyguard Bajar Walter was also charged with Making Use of Indecent Language as well as with Obstruction.

Reports are that 50 Cent was cooperative with police, but Walter is said to have been displeased when learning that his charge was being arrested and attempted to intervene.

The two were granted bail in the amount of $5000 each with two sureties.  They have surrendered their passports and are expected to appear in Court on Monday.

The media and most patrons were unaware of the incident at the time, as Music Festival authorities managed to largely clear out the Park before police departed with the rap star.  Reporters backstage were told that teams from the CPL were moving in to start preparing for cricket later this week, and within minutes the park was emptying.

WINN FM understands that prior to the rapper taking the stage, a Senior Police official advised Jackson’s manager about the laws of St. Kitts and Nevis in regard to the use of indecent language, indicating that he would be obliged to arrest him if he broke the law.  There was reportedly some discussion about what words were acceptable, and the manager is said to have assured that he would in turn relay the information to Jackson.

50 Cent’s fans seemed to enjoy the 40-year old star’s appearance dancing and singing along during his performance.  They screamed lustily when he pulled a young photographer from the media pit onto the stage with him and then a young woman, when he noticed that they knew all the words to his songs.

There were some comments from those in attendance about his liberal use of the so-called ‘f-word,’ but most seemed to shrug it off as being expected from Fiddy.

In 2003, another American rapper DMX, was arrested for using profanity during a St. Kitts Music Festival Concert.  DMX, whose real name is Earl Simmons, was released on bail of $1000.