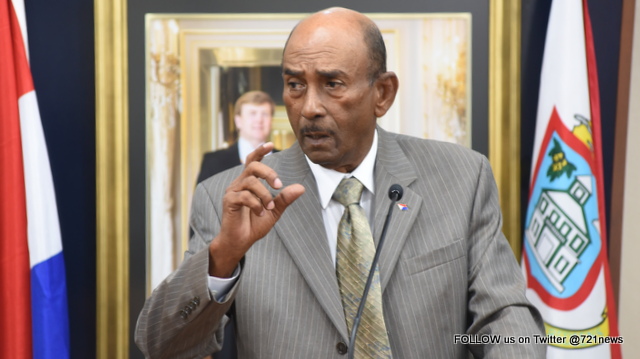 PHILIPSBURG – St. Maarten’s credit rating is expected to be downgraded by international organization Moody’s, according to Minister of Finance Richard Gibson.

“The decision has not yet been made, but the indications are Moody’s credit rating agency will downgrade St. Maarten to BAA2…A rating of BAA2 is not as good as a rating of BAA1,” the Minister explained.

Minister Gibson at Wednesday’s, April 6, Council of Ministers press briefing told journalists that the expected rating downgrade is a result of the country’s poor economic growth in recent years, which has been below 1%.

“We continue to perform from an economic point of view at a very low pace. Moody’s information indicates that our growth has been now for several years 0.5(%)…and that the outlook of the future, given the state of affairs regarding where the global world is concerned, and what is expected, that there are no indications that growth will change significantly as far as St. Maarten is concerned,” he said.

Meanwhile, Gibson told journalists that the downgrade means St. Maarten has work to do to improve its public apparatus with the aim of improving its financial performance. “There is something that we are not doing that we have to start to do, and if we don’t do it then the trend will continue that we are going to be downgraded,” the Minister stated, noting that there are other islands doing better economically than St. Maarten.

“The expectations as far as finance is concerned, and the institutions that we have, taking a look at their progress, Moody’s found that we have not made any strides in the past…we have to make a decision to upgrade and improve these institutions so that they meet the standards that Moody and other international institutions look for,” he added.

Moody’s Investors Service, often referred to as Moody’s, is the bond credit rating business of Moody’s Corporation, representing the company’s traditional line of business and its historical name. Moody’s Investors Service provides international financial research on bonds issued by commercial and government entities, and with Standard & Poor’s and Fitch Group, is considered one of the Big Three credit rating agencies.