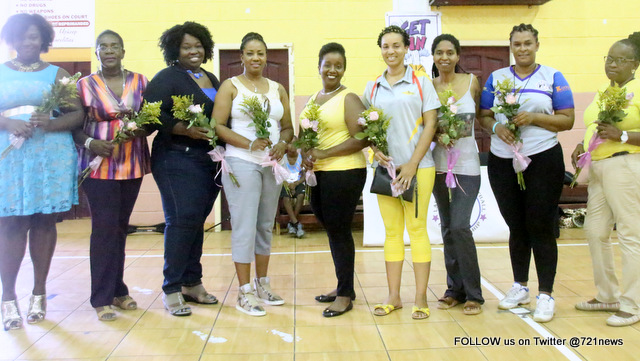 PHILIPSBURG – The Walichi Basketball Association (WBA) took time out on Sunday, March 13, before game 1 of the Ladies Basketball Championship (LBC) finals to honor these women for their contributions to the league and the community in honor of International Women’s Day this past Tuesday, March 8.

Inocencia Leonard of Leonard Enterprise was thanked for being the main sponsor of the league this year and for consistently giving back to the youth and community. Emilie Beencha, secretary of Thunderz Basketball Club, was honored for being the secretary of the club, in charge of the girls, being part of the club for 5 years, and being part of female basketball development.

Honored was Minister of Sports Silveria Jacobs, who is a volleyball player and an avid sports lover. She can be seen at various youth and sport events supporting the youth. President of Parliament Sarah A. Wescot-Williams was thanked for giving LBC her support by coming out and watching her granddaughter play as well as speaking at various opening ceremonies.

Stephanie Deerveld was honored for being a teacher at Sr. Magda Primary School, a former basketball player and assistant coach to a male basketball team. She recently took time out and coached the Sr. Magda boys team in the Interscholastic Basketball Championship (IBC). Nathalie Rubini was also honored for being a two-time award winning head referee at CTBSM on the French Side.

The Walichi Basketball Association would like to shine the light on these wonderful ladies in the community.