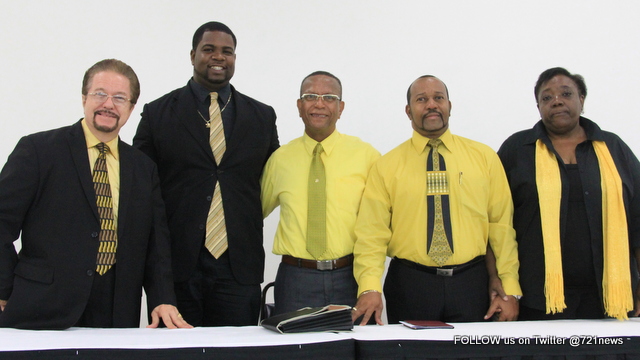 Great Bay, St. Maarten – Ever since the Sint Maarten Christian Party announced its participation in the upcoming elections the issue of separation of church and state became debatable. Opinions range from strict separation to a close association between church and state.  People wonder where the Sint Maarten Christian Party’s stands on this controversial issue. People can rest assured that the Sint Maarten Christian Party is not about establishing a religious state. First of all, the Party is of the opinion that neither the church nor the state should have any form of institutional control over each other. In other words, the state should not dictate what the church should do neither should the church be able to dictate and control what the state must do. Of course, the church is subject to the relevant laws pertaining to public order such as requesting permission to hold activities and events in public. On the other hand, we much recognize that the church, is also an integral part of our cultural heritage and as such may have an influence on our society including on government and government decisions. Furthermore, through the Christian upbringing of many of our elected and appointed officials their decision making can also be influenced by their Christian experience and their Christian belief system. The Sint Maarten Christian Party firmly believes that its governance must be guided by Christian principles, values and norms.

How does the separation of church and state play out in Sint Maarten? We note that the influence of God plays out strongly in many matters pertaining to Government. It starts with our constitution where in the pre-amble the people of Sint Maarten affirm that they recognize “the guiding principles of Almighty God as the core of their values”. Secondly, our Penal Code also prohibits blasphemy for which there is a fine or punishment of up to one year imprisonment. The oath or promise that elected and appointed officials make when taking up office is concluded with the phrase “so help me, God Almighty”. The Government, together with the churches hold five ecumenical services per year, where prayer is offered to the Almighty God. Political speeches as well as speeches by the governor, members of parliament and government often invoke the name of God or call on God to bless our country and our people. Our official representatives grew up on the island attending church activities and Christian principles of right and wrong were instilled in them from an early age. Therefore it is impossible to have a clear distinction between church and state. The Hon. Michael Manley, former prime minister of Jamaica ably describes the relationship between church and state as being “distinct but inseparable”.

We cannot deny the fact that the church has been a pioneer in the building and development of the Sint Maarten society. It was the Roman Catholic and Methodist churches that started education on St. Maarten. The Roman Catholic Church also pioneered health care and care for the elderly with the establishment of the St. Rose Hospital and the Sweet Repose respectively. Adventists have contributed to a more health conscious society with their health care and nutrition programs. All churches on the St. Maarten had and still have children and youth programs in which they instill social, cultural and Christian values. The Methodist Boys and Girls brigades as well as the Adventist Pathfinders, just to name a few, have done tremendous work in preparing our youth to be valuable God fearing citizens in our society. Hence, we cannot deny the significant role that the church has played in the development of Sint Maarten. As of October 10, 2010 our country Sint Maarten began a new constitutional phase and needs every institution in the society to help build and shape a new Sint Maarten. The Sint Maarten Christian Party is of the opinion that the church should also play an important role the development of country Sint Maarten. Therefore, like the Prime Minister of the Bahamas, who in a speech in June 2013 called for the church and the government to work together, the Sint Maarten Christian Party is also making a call for Government and the church to work together. We don’t want the church and the state to usurp each other’s authority because as the Hon. Michael Manley puts it, as mentioned earlier, that they each should be distinct yet inseparable. The Sint Maarten Christian Party believes that the government should seek council and advice from the churches and other religious groups just as it would do with other NGO’s and social groups in the society. Even though the relationship between church and state is a controversial topic we have seen how governments in Europe and in the Caribbean are able to embrace the church/religion according to their societal and legal realities. Because of the church’s role in the development of Sint Maarten, the Sint Maarten Christian Party believes that the church as an institution should be respected and that parliament and government should consult with the various umbrella church organizations just as they would with other social, cultural and business organizations. The Sint Maarten Christian Party is of the opinion that the relationship between the church and state should be distinct but yet inseparable.

The Sint Maarten Christian Party came to its conclusion:

That the relationship Church and State should be distinct yet inseparable after much research regarding this phenomena which began in the 4th century when Roman emperor, Constantine, was converted to Christianity and subsequently made Christianity the state religion. This is when the relationship between the church and the state became blurry and undefined. During the Middle Ages it was the emperor or the king who called the shots in the church. Up until around 1100 AD every Church Council that was to decide on important church doctrines was convened by the emperor. In the 16th century, King Henry VIII of England appointed himself as head of both the state as well as of the Church of England. At that time laws were passed decreeing who could and who could not participate in the Lord’s Supper and other sacraments, even deciding on who could and could not preach.

We should not place all the blame on the state’s interference in the church because there have been times in history when the church also controlled the affairs of the state.  Note that the phrase “separation of church and state” was mainly about protecting citizens from the church and not about protecting the church from the government. Take for example, the American Constitution, Article VI specifies that “no religious test shall ever be required as a qualification to any office or public trust under the United State”. This meant that anyone, regardless of religion, can hold any public job.

In the 19th and 20th centuries in Europe a movement arose with a strong desire to break away from such strict interference of the state in the business of the church. France, was the first European nation to adopt legislation to enforce a strict separation between church and state, in 1905. Since then several European nations have adopted legislation to ensure that church and state are kept separated. Currently, the European Union respects the ways in which its member states have decided to organize their own relationship between church and state. This relationship can be placed in three categories. (1) Existence of a state church such as in England, Greece, Malta and the Nordic states. (2) Strict separation between church and state as in the Netherlands, France and Ireland and (3) basic separation while recognizing a multitude of common tasks such as in Germany Belgium, Spain, Portugal, Italy, Hungary, Italy and Poland.

The Netherlands may have been able to legislate the separation of church and state but has not been able to separate God from the state. Let us look at a few examples. The edge lettering on the 2 euro coin reads “God zij met ons” which means in English “God be with us”. King Willem Alexander’s inauguration took place in a church and he swore using the oath “so help me God Almighty”. Also, God’s help is always invoked in the throne speech. This year King Willem Alexander ended with the phrase “join me in praying for strength and God’s blessing upon you”. Since 1932 blasphemy is punishable by law in the Netherlands. Christian parties (Roman Catholic and Protestant) have been taking part in the elections in the Netherlands since the 19th century.  In 1977 the three largest Christian parties merged and named themselves the Christian Democratic Appeal (CDA). The CDA has been in government for many years. Recognizing that God still plays a part in Dutch politics and governance I am reminded of the statement made by the Archbishop of San Juan in his homily during the swearing in of Puerto Rico’s Governor in January 2013 that the “separation of church and state doesn’t imply the separation of government and God.” Even though separation of church and state is strongly advocated in the United States of America we can still find many cases where God is still a part of Government. For example, the USA government employs a full time chaplain who, every day, offers a prayer at the commencement of each day’s sitting of the House of Representatives. Each year the President of the United States holds a prayer breakfast.

Taking a look at separation of church and state in the Caribbean we note that according to Donald Peters, in his book The Democratic System in the Caribbean that in the Eastern Caribbean “there is no well-defined separation between church and state”. All Eastern Caribbean governments have a Ministry of Ecclesiastical Affairs. The Hon. Vance Amory, Premier of Nevis who, also holds, among others the portfolio of Ecclesiastical Affairs explains in a speech on March 25, 2015 that: “The Ministry of Ecclesiastical Affairs, is a Ministry which is also part of my portfolio here in Nevis and it has been a portfolio which has been part of every government because it is important, that governments and the church work together in harmony for the better management of our society”. In Barbados, the Governor has the authority to appoint a senator to represent the interests of the religious community. From Europe, to the United States of America and on to the Caribbean we note that the church and the state have been able to develop a peaceful, harmonious and cooperative modus operandi. The Sint Maarten Christian Party believes that church and state in Sint Maarten will also be able to develop a peaceful and functional way of working together in the best interest of our country. And this relationship between church and state will best be described as distinct yet inseparable.