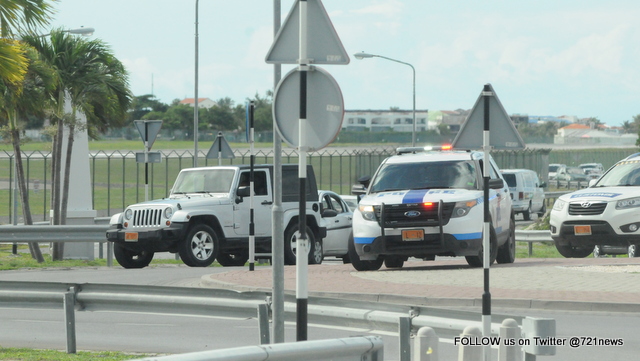 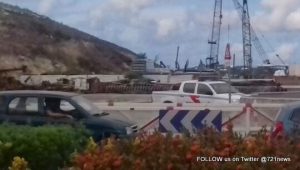 AIRPORT — Since Friday (November 2oth), the police and security of the airport had the PJIA at a high level of security. It was noticed that the Airport security was busy with a new security system that is not normal with orange cones spread out on the public area and extra securities was seen directing the traffic. Also notable was that the chief security Mr. Sprott was outside coordinating the parking, making sure everything was going as plan.

Also sources confirmed to us that the Police maximum security team (Arrest Team) was visible on the airport premises on Friday, Saturday and Sunday during arrivals of Insel Air flights. What is remarkable was that as soon as the Insel Air flight left, the high security goes away.

On Friday there were no visibility of uniformed staff but on Saturday and Sunday it was more visible and stricker. Sunday was even to the extreme with the shutting down of the roundabout leading to the airport. Witness on the airport told our news room that on Saturday you could see a big amount of custom officers and police present walking around the building but the was more concentrated at the inside and outside of the arrival area.

A witness also told us that many young male persons were searched by customs officers outside the airport building.

A press release from Government and Police stated that teh PJIA was evacuated on Sunday based on two calls saying that a explosive device was reported in the vicinity of the airport. The Press Release of the police never confirm the exact location, but the Chief of Police Carl John confirm smn-news.com that the “bomb threat” location was at Pink Iguana’s.

721news can confirm to our readers that no type of evacuation took place on PJIA airport and any surrounding business. If the police or Government was so concerned about a device exploding, they would have evacuated all car rentals and homes located on the north side of the runway or all hotels resorts and homes on the south side of the runway. None was evacuated, everything was as normal as any other day and the only thing that was confirmed was that the two roundabouts were closed and nobody could have passed.

The emergency alarm system of the airport was never activated and everybody remained in the building as if nothing had happen. Visitors leaving and coming could have moved freely. It was not like the last time when a Bomb threat was reported on a KLM flight.

Who is saying the truth and what really happen…. !!!

Sources is telling our newsroom that, It is believed that the police intelligence department got information that a shooting may have been planned to take place around the airport if the notorious group members of a well know drug organization gang reached Sint Maarten. This we learnt was the reason why the police has taken strict security measures to avoid this from happening. Reason also they guarded and took strict measures at a local funeral that took place on Sunday morning.

But everybody are tight lip on what or why this strict security measures on our public road. Till late in the afternoon police presence was seen in Simpsonbay area and surrounding the airport.

Editor’s Note: We reporting this story base on actual facts that if an explosive device was reported by anonymous person or persons why keep the airport open and why keep businesses running like nothing has happen. Every minute to save a life is worthwhile. So is very hard for someone to realize after everything has happen that their lives were put in danger where they could have moved out the zone if they knew what was taking place.

The government needs to learn from overseas bombing and see what type of destruction this can cause. Stop taking things as hoax when a call or if a call came in. Is time for the Government of St Maarten take note that our Police department is not 100% capable of handling Bomb threats they don’t have any special equipment to do so and the lives of those police officers self  is being put at stake.

Sint Maarten has a group of Militaries station on the island and they are more qualify to detect explosive. A team of Bomb squad need to be stationed here for the SSS islands.

If it continue so one day it will happen for real and innocent people will end up losing their lives just because someone (Government or Police) doesn’t want to bring panic within the community.

This so called “Bomb threat” has went viral on social media and media houses overseas done pick it up. This is not a good sign for PJIA.
We hope next time the real truth will be said, because now it have to many contradicted statements with the real facts !!!!! 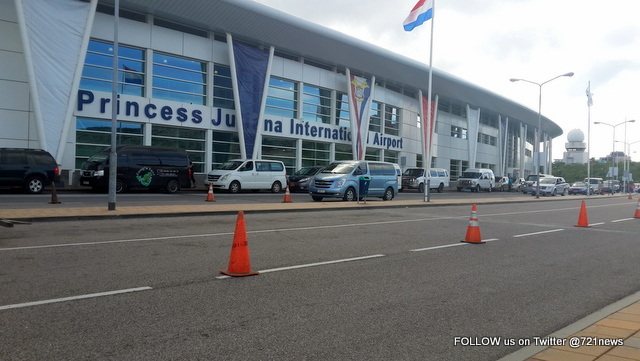 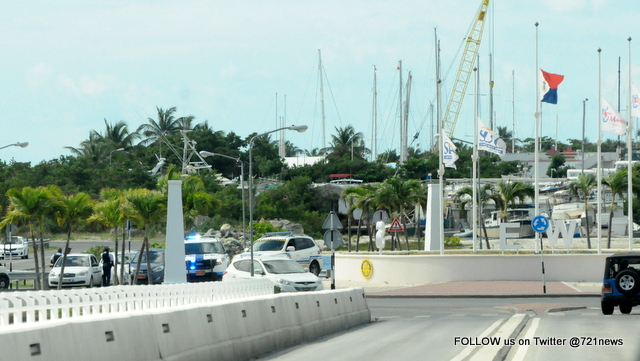 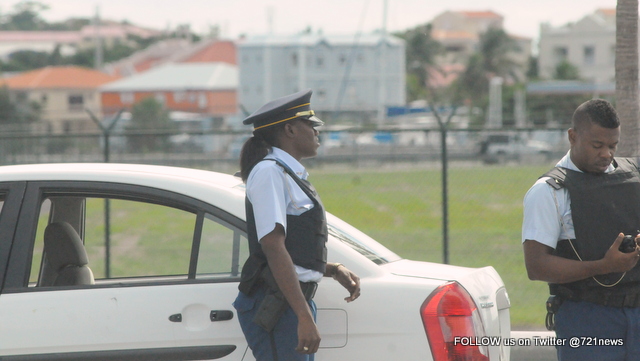