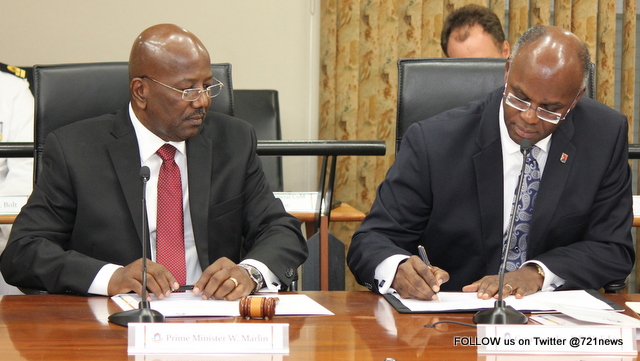 PHILIPSBURG, St. Maarten – A new Council of Ministers took the oath of office, administered by the Governor of St. Maarten drs. Eugene B. Holiday on Thursday.

During the constituting meeting held at the Government Administration building right after the oath taking, the new leader of government Minister William Marlin introduced his new Council of Ministers as well as outlined the objectives of his new government.

The Honorable William Marlin stated that the matter of elections would be one of the primary matters to be dealt with by his government as well as the financial crisis that the island is currently facing.

The objective is to lift the instruction handed down to St. Maarten within the shortest possible period. The Leader of government also mentioned the objective to tackle a number of social issues as well.

It is the plan of the coalition to stay together regardless of when the election will be held Minister Marlin stated.

He also noted that the primary task of the new Council of Minister should be to handle the matter of elections and the pressing financial problems currently affecting the island. More can be heard via PodCast above. Photo Samuel Allen/ sxmislandtime.com