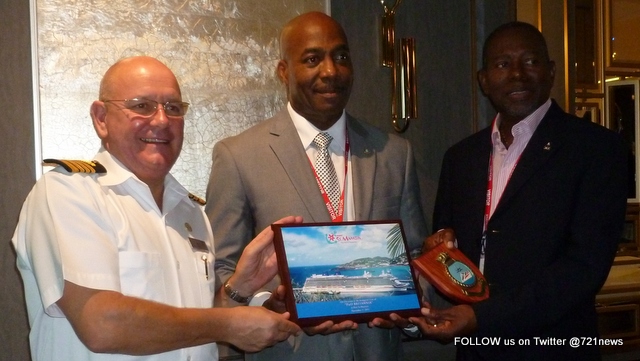 PORT ST. MAARTEN – A delegation from the Government of Sint Maarten headed by Minister of Tourism & Economic Affairs Hon. Ernest Sams along with Port St. Maarten officials Government Liaison Hector Peters, exchanged plaques with the Captain of Britannia David Pembridge on Monday morning, after officially welcoming him, his crew and passengers to the destination.

P&O Cruises, has a fleet of seven ships offering holidays tailored to British tastes ensuring passengers have the holiday of a lifetime, every time.

Britannia is the largest ship built for the British cruise market, and offers a sophisticated, contemporary holiday experience across health and beauty, shopping and entertainment, and with a strong focus on dining.

Captain Pembridge is not new to Sint Maarten, and has visited the island several times before the existing cruise piers were built.  During the welcome pleasantries onboard, Pembridge said that Sint Maarten was a lovely place to visit, and was considered a second home for the Britannia after Barbados where the vessel is home-porting for the winter season.

Minister of Tourism & Economic Affairs Hon. Ernest Sams during the official plaque exchange ceremony welcomed Captain Pembridge, his crew and passengers to the ‘Friendly Island,’ and added that he continued to look forward to seeing the Britannia docking at Port St. Maarten for many more years to come.

Port St. Maarten Government Liaison Hector Peters, thanked Captain Pembridge and wished him and his passengers a most enjoyable stay on the island.

Britannia’s itinerary includes many other Caribbean islands, but Sint Maarten is the second most visited as the destination is on every itinerary between now and the end of March 2016.

Captain Pembridge made reference to Port St. Maarten’s logistics where it concerns the options that cruise passengers have to get to Philipsburg for shopping, restaurants, and watersports activities, pointing out the options available: water taxi, walking or taking a taxi.

Britannia was added to the P&O Cruises fleet in March after being christened by Queen Elizabeth II. The 141,000 ton vessel was ordered in 2011 at a costs of 473 million pounds, and was designed exclusively for British market.  Britannia has been described as the latest ‘modern classic’, heralding a new era of holiday choice.

The cruise ship was built by Fincantieri at its shipyard in Monfalcone, Italy; the vessel is 1,083 feet long; beam 144 feet; 232 feet tall; has 15 passenger decks; carries 4324 passengers and 1398 officers and crew.

Britannia provides a 14 night cruise throughout the Caribbean between now and in the first quarter of 2016 which is the winter cruise season.  Its current cruise itinerary includes Barbados, Grenada, Margarita Island, Curacao, Aruba, Tortola, St. Maarten, Antigua, St. Kitts and back to Barbados.

During the summer season, Britannia will sail to the Mediterranean, Norwegian fjords, the Baltic, Canary Islands and Atlantic Islands.