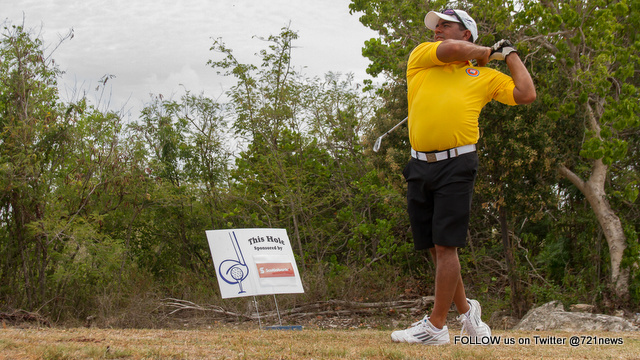 MULLET BAY, Sint Maarten —  Howard Hobgood had to work hard this time around to win the Overall Low Gross prize during the November Medal Play Tournament. With a 74 gross score, he beat Rodney Tackling and Pierre Garcia by just one stroke and Steve Mix by two strokes. Nevertheless, Steve Mix wasn’t left empty-handed, he won Overall Low Net with a score of 65 after deduction of his 11 handicap.

In total 28 golfers challenged the Mullet Bay Golf Course last Sunday during this monthly 18 hole tournament that was organized by the SMGA. It was the 2nd round qualification opportunity to make the 2016 St. Maarten Team that will participate in next year’s ECGA Tournament.

In the Men’s category there were 11 players competing for top honors. As was the case last month, a match of cards was needed to decide the winner, this time between Rodney Tackling and for the second time in a row Pierre Garcia. Unfortunately for the 13 year old Garcia, it was Tackling that won Low Gross with a score of 75 gross. In the same category Alain Haillant won 1st Low Net with a score of 70 strokes after deduction of his 15 handicap. Haillant also won the prize for lowest putts after a match of cards with his son Jonathan, needing 29 putts during the 18 holes stretch.

In the Super Seniors Category for players over 60 years old, 6 players participated in this tournament. 1st Low Gross was won by Steven Mix with a score of 76, 1st Low Net was won by Francois Anton, who won this also in October, with a score of 68 after deduction of his 18 handicap.

The Ladies Category had only 3 participants this time. 1st Low Gross was won by Gitte Poulsen, with a score of 92 strokes, 1st Low Net was won by Sidsel Jacobsen with a Low Net score of 78 strokes.