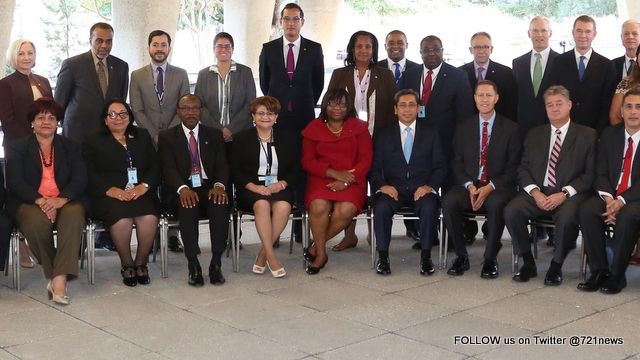 The PAHO Directing Council meets yearly – except for every fifth year – to set the organization’s policies and priorities. In addition to setting mandates for PAHO’s technical cooperation programs, the meeting also provides a forum for technical experts and government representatives to exchange information and debate regional health priorities.

Building on decades of increases in vaccination rates and recent advances in introducing new vaccines, the health officials pledged to extend the full benefits of immunization to all people in the Americas by 2020.

The strategy adopted by the health ministers aims to protect the historic achievements of eliminating smallpox, polio and rubella in the region by strengthening immunization programs. And it addresses a recent rise in vaccine coverage gaps among some of the region’s most marginalized peoples while tackling new immunization goals. Towards that end, the ministers agreed to identify and quantify factors that contribute to low vaccination coverage and to supply continuous training and support to the region’s thousands of public health workers, who have been on the front lines of the region’s hard-won immunization gains.

Health leaders pledged to take new action to mitigate the impact of a dramatic increase over the next 20 years in dementias in older people in the region.

Currently, some 6.5% to 8.5% of adults over 60 in the Americas have dementias of one kind or another, and if the trends continue the number of people with these conditions is expected to nearly double in the region over the next 20 years, from 7.8 million in 2010 to 14.8 million in 2030.

Most people with dementias in the Americas are cared for at home, leading to higher death rates among not just the older persons but also their overstrained caregivers. Many countries in the region do not have adequate long-term care facilities for the elderly, nor the resources to build more.

The new strategy and plan for tackling dementias calls for greater investments in long-term care, more research on the needs of people suffering from dementias, and new evidence-based models for improving treatment and care.

At the conclusion of the meeting, various strategies and plans to guide public health action were approved.

The areas that health officials from countries of the Americas pledged to take collection action on were violence against women; dementia; work-related illness and injuries; strategies aimed at expanding the benefits of immunization; reducing deaths and illness from viral hepatitis; accelerating the fight against tuberculosis; strengthening health-related laws; and antimicrobial resistance.

PAHO’s next Directing Council meeting is scheduled for September-October 2016.