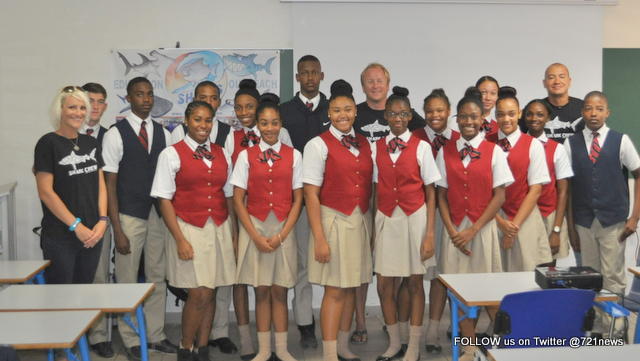 Philipsburg, Sint Maarten — World Renowned Shark Experts Jillian and Duncan Brake of the Sharks4Kids Foundation are on Sint Maarten as part of the educational campaign by the Nature Foundation introducing school children to sharks and the importance of preserving and protecting these important animals. The first presentation was at the Charlotte Brookson Academy.

Sharks play a critical role in the delicate balance of ocean ecosystems. Yet despite their importance, shark populations are being decimated globally. The rapid decline in populations teamed with the man-eating monster stereotypes sharks have garnered over the years, have left sharks fighting for their survival.

The goal of the Sharks4Kids presentations is to create a new generation of shark advocates through access to a dynamic range of educational materials. Students who have received the presentations have access games, activities and info sheets to satisfy their own curiosity about sharks. Photos and videos from scientists and conservationists bring an exciting element into the classroom and show students the beauty of the ocean.

“The goal of the presentations is to engage students and get them excited about sharks. We want to dispel some of the myths surrounding these amazing animals while encouraging kids be good junior scientists and global citizens; what they do matters and they can make a difference for sharks no matter who they are or where they live. Presentations include Let’s Investigate Sharks: An Introduction to Sharks, Shark Conservation, Shark Tagging and Science, Life as Marine Biologist, Shark Diving & Underwater Filming,” commented the presenters.