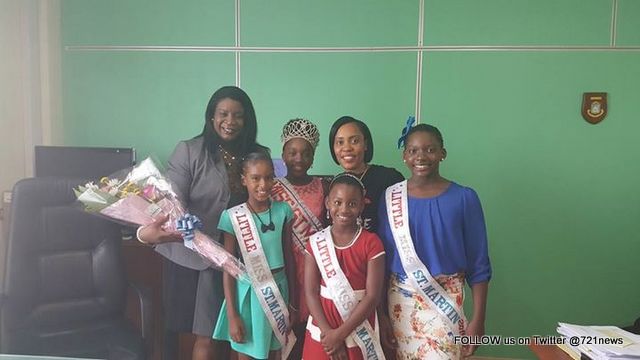 The reigning Queen Trinity, the contestants of the Little Miss St.Martin Pageant 2015 and Director Ms. Nzinga Lake paid a courtesy visit to the Minister of Culture , the honorable Minister Mrs. Bourne-Gumbs on Friday October 23, 2015. The Minister was introduced the 3 lovely contestants and  briefed on the final preparations leading into the pageant slated for Sunday Nov 1, 2015 at the Philipsburg Cultural center. Ms. Nzinga Lake, Pageant director on behalf of the contestants, Queen Trinity personally invited the Minister and her cabinet to attend the pageant in honor of St.Maarten/ St.Martin’s day. A surprise gift of a flower arrangement and a Happy Birthday song was sang to the Minister in advance for her bday slated ( Monday October 26th).
photo: The honorable Minister of Culture Mrs. Bourne- Gumbs, Queen Trinity, contestants and Pageant Director Ms. Nzinga Lake