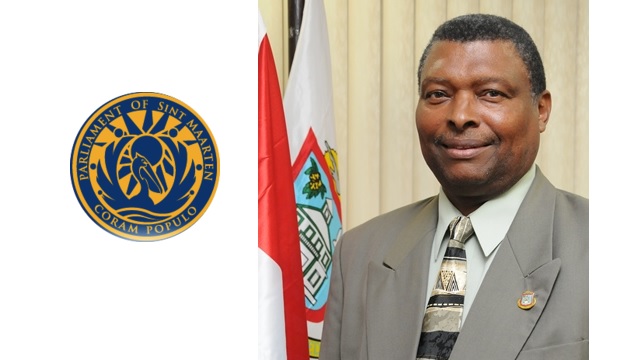 PHILIPSBURG, Sint Maarten – On Monday, 12th October, President of Parliament Hon. Dr. Lloyd Richardson, made his position to Parliament by informing the Secretariat of the House of Parliament.

“Given the present and still ongoing political developments, I hereby inform you that I have made the seat of President of the Parliament of Sint Maarten available to whomsoever the Parliament sees fit to assume said post.

“I would also like to thank the members of the Presidium for their untiring cooperation, the secretariat for their unrelenting support, the employees and other related staff for the manner in which they all performed their duties during this period of transition.

“The seat of President of Parliament was not an aspiration of mine, nonetheless my willingness to serve where my country’s need of me was the greatest has been and continues to be my passion.

“That being said, I would like to take this moment in our country’s history to say to all primarily responsible, that our people, our collective reputation, our country’s stability and future are riding perilously on the outcome of these talks.   I want to rest on your conscience the full weight of your behavior and your decisions.

“Think about our infant nation first and act with sober maturity and not from a position of personal gain, so that we can emerge with a stronger parliament, council of ministers, taller as politicians resulting eventually in a more peaceful, wiser and more prosperous nation for all our people. May God Almighty place His guiding hand on us all.

“Last but not least, I thank my staff and colleagues for their cooperation and respect shown, I look forward to working with you all until such time that this chapter of my political career would have come to an end.  Best Wishes to you and this entire country,” President of Parliament Hon. Dr. Lloyd Richardson stated in his notice to the Secretariat of Parliament.

Copies were also sent to the Governor of Sint Maarten and the Council of Ministers.

The House of Parliament will meet in a plenary session on October 13 to appoint the President and two Vice Presidents.

The public Plenary Session is set for Tuesday, at 9.00am in the General Assembly Chamber of the House at Wilhelmina Straat #1 in Philipsburg.

The agenda point is the appointment of the President and Vice Presidents of Parliament.